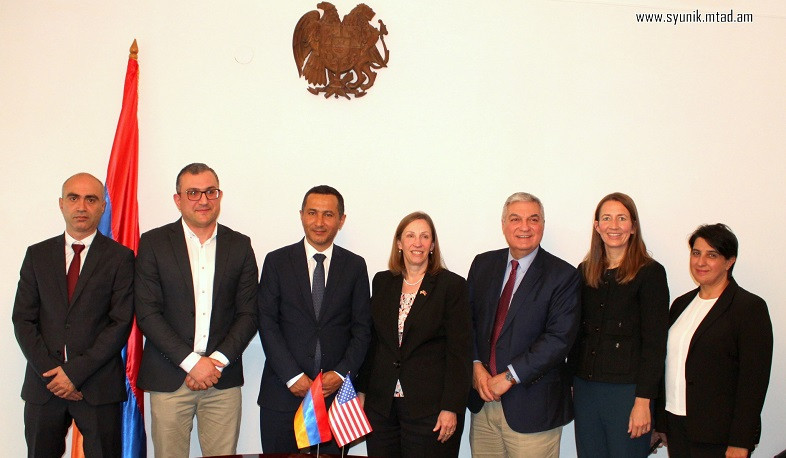 At highest levels, we do everything to prevent use of force: Lynne Tracy

On September 27, Governor of Syunik Robert Ghukasyan held a meeting with the United States Ambassador to Armenia Lynne Tracy.

Ambassador Tracy visited Syunik together with the Deputy Director of the Economic and Political Department of the US Embassy Kim Zapfel, Mission Director of USAID/Armenia John Allelo and USAID Program Manager Haikanush Bagratunyan, the governor’s office said in a press release.

The governor thanked the ambassador for the visit and especially for being in Syunik on September 27th.

Noting that September 27th marks the second anniversary of the 44-Day War, the Ambassador conveyed her respect for the memory of the victims and condolences to their families, stating that unfortunately the war of the recent days again claimed the lives of many young men.

Presenting the details of the September 13 Azerbaijani invasion into Syunik, the Governor said:

“It is very important for us that you are with us at this difficult time. We know, Mrs. Ambassador, both your and the US position about this all, for which we are grateful. But the latest two-day war, which took place in sovereign territory of Armenia, showed that the enemy is not only disregarding all rights of another country and fundamental human rights, but also humanitarian elements and was even targeting ambulance vehicles with strikes. There is a big risk of military action against the peaceful population here. All of this must receive a strong assessment by the international community, therefore we once again ask everyone’s attention for the latest actions by the enemy and clear pressure to prevent a repetition.”

Ambassador Tracy said that this conflict is in the focus of the United States, even in conditions when there are other ongoing conflicts in the broader region. “And we are doing everything in the highest levels, also through diplomatic channels, to not allow the use of force, to ensure the continuity of negotiations and to have the kind of prospect of resolution of the issue that would bring long-term and sustainable peace.”

Ambassador Tracy said she understands how difficult it is now for residents of Syunik and other border provinces to have a sense of security, and that’s why she is visiting the province to understand the situation on the ground and to understand how they can help.

Governor Ghukasyan discussed several issues which emerged in context of the developments around the province, and also thanked the USAID for its work.

Since Ambassador Tracy is completing her mission in Armenia, at the end of the meeting she said: “The situation in Syunik and generally in Armenia will always be in my thoughts, and if there is anything I can do in the future to help establish peace here I will do it regardless of where I’ll be.”