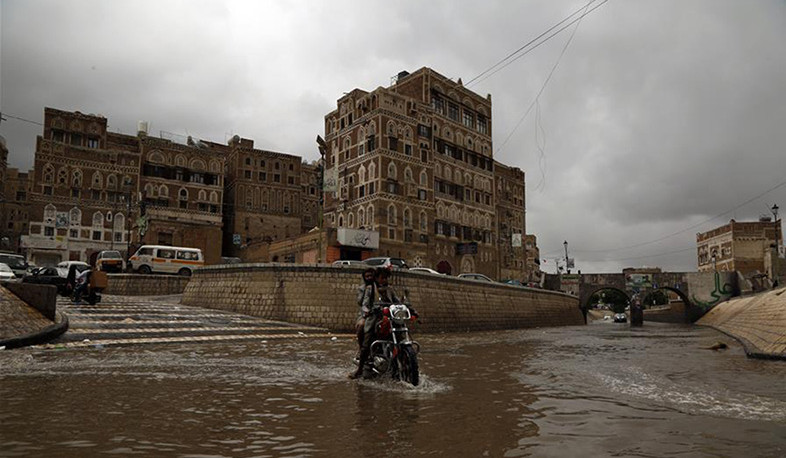 Continuous heavy rains in Yemen have destroyed a number of buildings at the world heritage site of the Old City of Sanaa.
According to officials from local city protection bureau, the torrential rain has lasted for nearly a month, causing a building to completely collapse and other two buildings to partially collapse.
In addition, the roofs of 11 ancient buildings fell down, and the roofs of 49 ancient buildings partially collapsed, and 500 buildings were leaked due to the rainfall.
"There are cracks everywhere, and there are tracks of rainwater. The plaster of the wall has been washed away by rainwater. It's not that I don't care about the house, but the recent heavy rains have made it worse and worse. We are going to be homeless," said Yousef Al-Kibsi, owner of one of the old buildings of Sanaa.
Built before the 11th century, the over 6,000 mud-brick tower houses are decorated with geometric patterns of white plaster and stained glass windows.
The old city of Sanaa, inhabited for more than 2,500 years, was inscribed on the World Heritage List of the United Nations Educational, Scientific and Cultural Organization (UNESCO) in 1986. It was added to the List of World Heritage in Danger in 2015 after the eruption of the civil war.
According to the city protection bureau, there are 11,777 houses in the old city of Sanaa.
The city has been suffered during the war, said the official, adding that the continuous rainfall and lack of funds will made the situation worse.
"There have been severe shortfalls of the Yemeni government's budget [for the old city], and now the war has worsened the situation in the ancient city of Sanaa, where airstrikes have been going on for a long time. The explosions earlier had destabilized and shaken the foundations of the ancient city, and the heaviest rain in decades had made things even worse," said Ahmed Al-Rubaie, a representative of Yemen to UNESCO.
Yemen has been mired in a civil war since late 2014 when the Iran-backed Houthi militia seized control of several northern provinces and forced the Saudi-backed Yemeni government out of the capital Sanaa.
The war has killed tens of thousands of people, displaced 4 million, and pushed the poorest Arab country to the brink of starvation.
Author:Davit Muradyan
Views 13