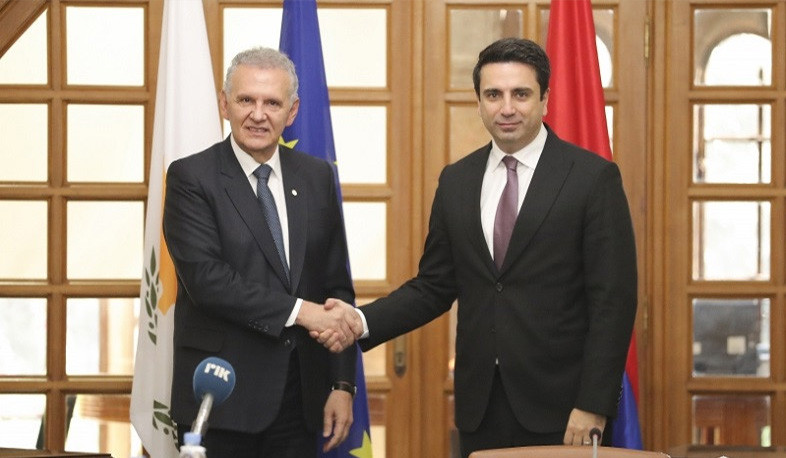 On the final day of the official visit to Cyprus the Delegation led by the RA NA President met with the Presidential Commissioner of the Republic of Cyprus Photis Photiou.

Welcoming the guests, the Presidential Commissioner conveyed the best wishes from the President of Cyprus, expressing regret that he left the country on a working visit a few days ago.

The RA NA President thanked the Presidential Commissioner for the meeting and warm reception, adding that commonalities of the value of systems and world concept of the Armenians and the Cypriots are considered to be the basis of the Armenian-Cypriot centuries-old friendship.

Both sides highlighted the continuous efforts directed to the prevention of the genocides by Armenia and Cyprus, as well as the united fighting in the issues of human rights, preservation of values and restoration of justice. Alen Simonyan considered invaluable the position of principle of the authorities of brotherly Cyprus and all colleagues of parliament in all vital issues concerning Armenia and the Armenian people.

Touching upon the development of the Armenian-Cypriot relations, the Presidential Commissioner highlighted the role of the Armenian community of Cyprus. He presented details to the RA NA President about the state care in the preservation of the Armenian schools and church.

They referred to the Armenian and Cypriot Diaspora, emphasizing the factor of Diaspora in voicing the joint problems and pre-indicating necessary solutions.

The sides related to the Azerbaijani-Turkish military aggression, in this context discussing the topic of the missing, the prisoners of law and the hostages.

The Presidential Commissioner has underlined that Armenia-Cyprus-Greece tripartite relations are considered to be one of the priorities of Cyprus. He has informed that in that framework an exhibition on the genocides of the Armenians and the Pontic Greeks is designed to open in the city of Thessaloniki of Greece, full of Armenians.

At the end of the meeting the sides expressed confidence that the implementation of the joint programmes would have a significant contribution to the further expansion of the excellent relations existing between Armenia and Cyprus and outlining new opportunities of multi-spherical cooperation.