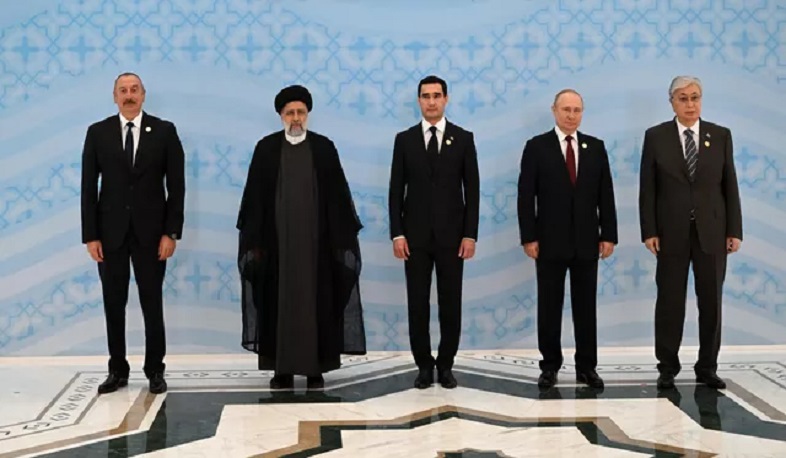 The presidents of the five Caspian Sea nations have agreed that armed forces of other nations won’t be allowed to maintain a presence in the sea, according to a communique of their summit, TASS reports.

That agreement is one of about two dozen principles that the presidents laid out in the statement following the Sixth Caspian Summit.

"The Presidents reaffirmed that the activities of the littoral states in the Caspian Sea will be carried out on the basis of the following principles: <...> non-presence in the Caspian Sea of armed forces that do not belong to the littoral states; non-provision by any coastal state of its territory to other states for the commission of aggression and other hostilities against any of the coastal states," said the statement that was published on the website of the president of Kazakhstan.

The principles also include "ensuring a stable balance of armaments of the littoral states in the Caspian Sea, carrying out military construction within reasonable sufficiency, taking into account the interests of all littoral states, not endangering each other's security", "observance of established confidence-building measures in the field of military activities in the spirit of predictability and transparency in accordance with the common efforts to strengthen regional security and stability, including in accordance with the international treaties concluded between all littoral states."

The summit participants assured that they would proceed from "respect for the sovereignty, territorial integrity, independence, sovereign equality of states, non-use of force or threat of force, mutual respect, cooperation, non-interference in each other's internal affairs; the use of the Caspian Sea for peaceful purposes, turning it into a zone peace, good neighborliness, friendship and cooperation, resolution of all issues related to the Caspian Sea, peaceful means; ensuring security and stability in the Caspian region", "freedom of civil aircraft flights in accordance with the rules of the International Civil Aviation Organization."