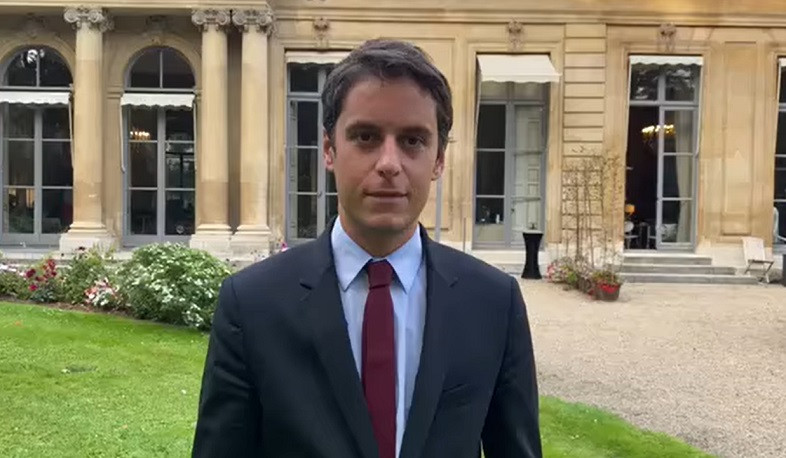 The Secretary of State under the Prime Minister of France, Government Spokesman Gabriel Attal issued a message on the occasion of the 30th anniversary of the independence of the Republic of Armenia.

I want to send my warmest thoughts to all Armenians, to all Armenians in France and elsewhere to celebrate this anniversary of the Independence of the Republic of Armenia.

We have seen this, of course, when the President of the Republic of France Emmanuel Macron was one of the first western states leaders to denounce foreign incursions into Nagorno-Karabakh. We also saw that Emmanuel Macron most strongly denounced the Turkish interference in this issue sending jihadists into the conflict zone.

We celebrate this fraternal relationship on a daily basis because the President of the Republic and France are with Armenia to defend its independence, to defend its territorial integrity, to defend its cultural heritage.

We are also with our friends, our Armenian brothers and sisters, bringing solidarity to life. A few days ago, a first shipment of 25,000 doses of vaccines was made by France to Armenia, is a sign that in the face of all the difficulties we are on the side of Armenia.

We also defend Armenians on a daily basis in France. I was very proud to belong to the Government the Council of Ministers of which dissolved the grouping of ‘Gray Wolves’, responsible for so many threats and so much aggression against the Armenians. And here too it is an armed wing, Turkish interference on our soil which is deeply unacceptable.

This is all that I wanted to remember on this important day for you, but important for all of us.

I wish you a very happy Independence Day.