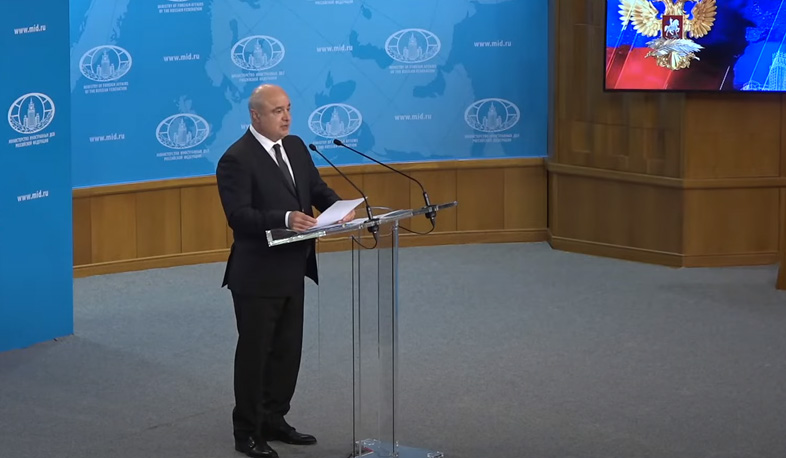 We keep issue under control: representative of Russian Foreign Ministry about return of Armenian captives and fake trials against them

On August 05, at the briefing with journalists, Alexander Bikantov, Deputy Director of the Press and Information Department of the Russian Foreign Ministry, also referred to the provocations of Azerbaijan against Armenia and Artsakh (Nagorno-Karabakh).

Answering the question that Baku prevents the entry of Armenian pilgrims to Dadivank, Bikantov noted, “We always pay attention to the preservation of the cultural and historical heritage of Nagorno-Karabakh. We regularly discuss this topic with both Baku and Yerevan. Russian peacekeepers accompany pilgrims visiting Dadivank, Amaras and Gandzasar. We support the entry of a UNESCO mission to the region, which can assess the situation on the ground. The issue is also in the field of view of the OSCE Minsk Group Co-Chairs.”

Alexander Bikantov, referring to the provocations of the Azerbaijani armed forces on July 28 and the firing on Armenian villages, noted that the Russian side is concerned about the frequent armed incidents in some parts of the Armenian-Azerbaijani border.

“What is even more worrying is the fact that these incidents are accompanied by human casualties. Unfortunately, despite all the steps taken, the tension is not easing. We urge all parties to refrain from any action that would aggravate the situation․ Problems should be resolved exclusively through political and diplomatic means,” he said.

Bikantov noted that Russia is ready to assist in the launch of joint delimitation and demarcation work.

“These steps, the unblocking of economic and transport ties in the region, as well as the promotion of inter-community dialogue, will contribute to the Transcaucasia becoming a zone of stability and security, in accordance with the statements of the leaders of Armenia, Russia and Azerbaijan,” the diplomat added.

To the question that Baku continues to violate the provisions of the trilateral statements on the ceasefire and to make false accusations against the Armenian prisoners of war held in Baku, the representative of the Russian Foreign Ministry answered.

“Russia’s position has been known for a long time, it has not changed. This issue is always under our control. The contacts continue at the level of the defense ministries of the two countries. On August 2, the commander of the Russian peacekeeping contingent in Nagorno-Karabakh, Lieutenant General Rustam Muradov had working meetings with representatives of the Azerbaijani side.”