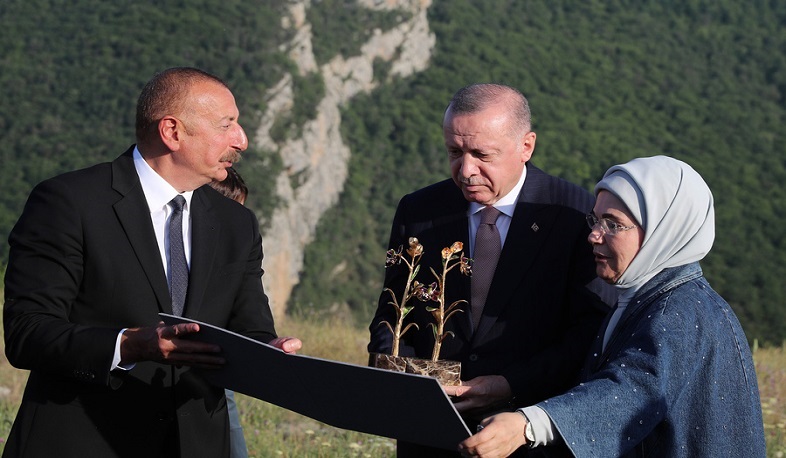 Turkey wants to deploy troops in the region, but Moscow will hardly agree. Turkish military assistance to Baku is no longer as important as it was during the Second Artsakh War, said Stanislav Pritchin, a senior fellow at the Russian Academy of Sciences’ Institute for World Economy and International Relations, Forbes reports.

Turkish President Recep Tayyip Erdogan’s visit to the territories which became under the control of Azerbaijan during the Second Artsakh War - the city of Shushi, is in the center of attention outside the region, too. Erdogan’s talks with Azerbaijani President Ilham Aliyev were highlighted by the adoption of the so-called Shushi Declaration, which, unlike all previous bilateral agreements, provides a legal opportunity for the deployment of Turkish troops in Azerbaijan.

One of the points of the declaration states that “the two sides will promote the exchange of personnel to strengthen defense capabilities, military security, joint training and exercises, increase the overall potential of the two countries’ armed forces, close cooperation based on modern technologies, weapons and ammunition management.”

There was no talk of deploying Turkish troops in Azerbaijan during the open part of the Shushi talks. But the next day Erdogan said, “This issue [the base creation option] does not go beyond the scope of the declaration. This topic can be developed during the consultations between the President of Azerbaijan Ilham Aliyev and the President of the Russian Federation Vladimir Putin. It can be done in a different way during our negotiations.”

According to Stanislav Pritchin, there is no strategic benefit for Baku from the presence of Turkish troops in the country. Azerbaijan has already solved the key issue for it - the return of the adjacent regions of Nagorno-Karabakh, which it lost during the first war, and is now preparing the ground for the integration of the entire region. There is no need to strengthen the potential of the Azerbaijani army by involving the Turkish military. Baku also has no other issues that require foreign military assistance. Thus, we can conclude that the initiator of the deployment of the base is Ankara, it is trying to persuade its ally to agree.

It is clear that the presence of Turkish troops in the South Caucasus will not be the best development for Moscow, as it will create additional tension in the region, which has begun to return to peaceful life under the new status quo. If the issue is discussed during the Russian-Turkish talks, Moscow will most likely oppose Turkish plans. It is not accidental that Russian Foreign Minister Sergey Lavrov, commenting on the information about the deployment of Turkish troops, called it ‘rumors’.

It must be admitted that Turkey took another step to strengthen itself in the South Caucasus region. However, the last word is with Russia, the regional players, first of all, Azerbaijan, who have the opportunity to say ‘no’ to their Turkish counterparts.