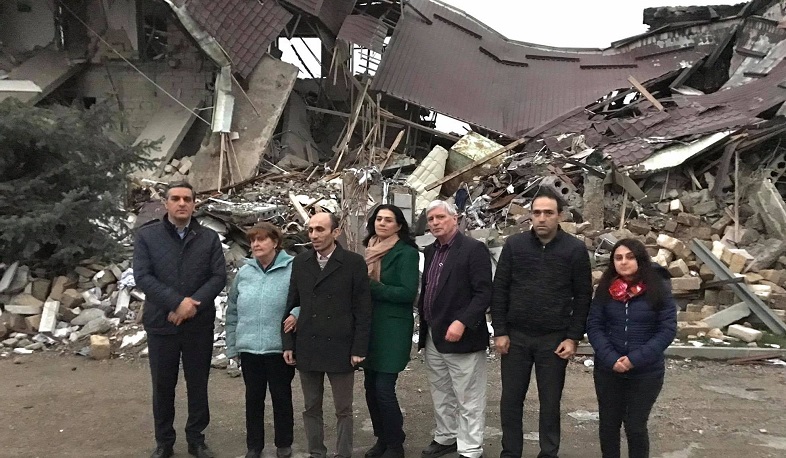 The Ombudsman of the Artsakh Republic Artak Beglaryan received the delegation led by Baroness Caroline Cox, Member of the House of Lords of the United Kingdom, who arrived in Artsakh with the RA Ombudsman Arman Tatoyan.
Beglaryan presented the war crimes committed by Azerbaijan during the period from September 27 to November 9 and the results of the fact-finding mission carried out during the Azerbaijani aggression. He noted that during the war the Human Rights Defender of Artsakh published 2 interim reports on Azerbaijani atrocities, 3 closed reports on the inhuman treatment of the bodies of Armenian prisoners of war and servicemen, 1 report on the targeting of the Ghazanchetsots Church in Shushi, 1 report on the violation of children's rights, as well as a joint report with the RA Ombudsman on the use of chemical weapons.
The recorded facts were more than enough for international human rights organizations and the international community in general to take appropriate steps and properly condemn and prevent Azerbaijan's criminal behavior.
In her turn, Baroness Caroline Cox stressed that for many years she had always spoken about the rights of the people of Artsakh in the international arena, and during the war, called on the concerned structures to take practical steps to protect the rights of the people of Artsakh. The Baroness stressed that she supports the just struggle of the people of Artsakh for their rights and freedoms, and the international community must pay due attention to the existing problems.
After the meeting, the delegation, accompanied by the Artsakh Ombudsman, visited a number of civilian buildings destroyed by the Azerbaijani aggression.
Views 972