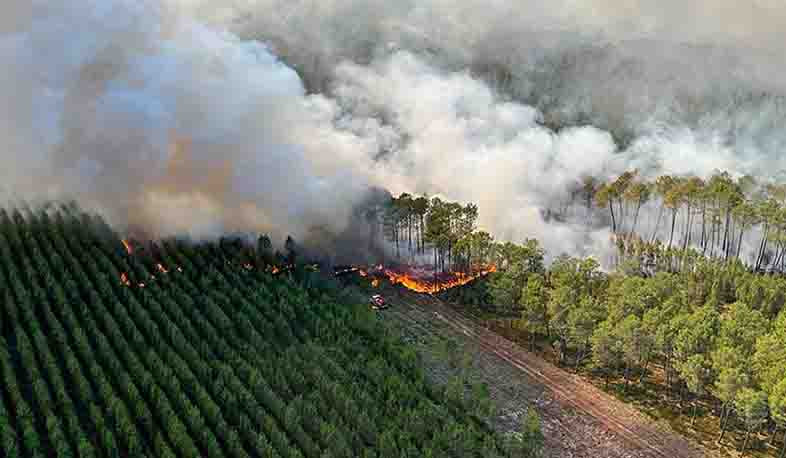 Wildfires continue to rage in Gironde

France is continuing to battle a "monster" wildfire in the southwestern Landiras region near the winegrowing heartland of Bordeaux. According to Gregory Allione from the French firefighter's body FNSPF "I would qualify the fire in Landiras as a mega-fire." "It's an ogre, it's a monster," he added.
Wildfires have torn through the Gironde region near Bordeaux in southwestern France this week, destroying homes and forcing the evacuation of at least 10,000 residents, some of whom had clambered onto rooftops as the flames got closer. Dozens of houses were destroyed, and over 6,800 hectares of land were scorched, forcing the evacuation of at least 10,000 people. Firefighters from across Europe have come to France's assistance as the massive blaze in the wine-growing Gironde region continues to burn out of control for the third day.
On Thursday, more than 1,000 firefighters backed by water-bombing aircraft were trying to contain the blaze in the southwestern Gironde region that has forced thousands of people from their homes. French President Emmanuel Macron said European countries were coming to France's rescue. Two Greek tanker planes have arrived alongside two Swedish air tractors, 64 firefighters from Germany, 146 from Poland, and more from Austria and Romania.
Prime Minister Elisabeth Borne and Interior Minister Gérald Darmanin have visited the scorched region. A revised estimate of 57,200 hectares has been destroyed by fire in France since June.
Author:Davit Muradyan
Views 7