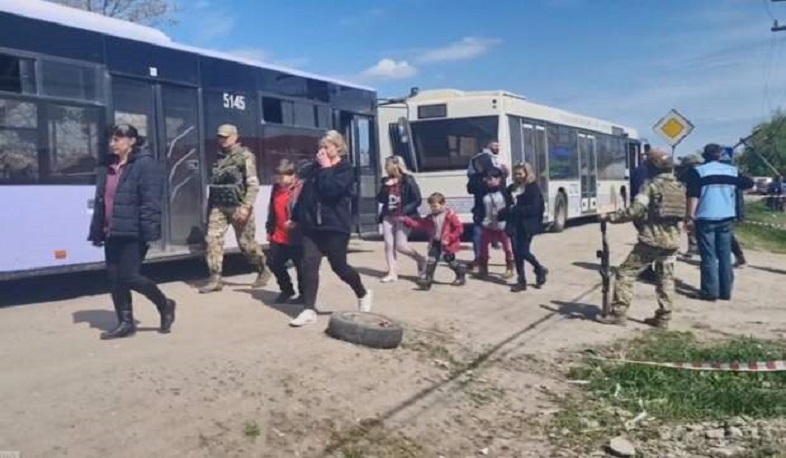 Civilians being evacuated from Azovstal factory

Some 80 civilians, including children and women, held by Ukrainian nationalists have been evacuated from the territory of Azovstal thanks to the initiative of Russian President Vladimir Putin, the Russian Defense Ministry said in a statement on Sunday.

"Thanks to the initiative of President of the Russian Federation Vladimir Putin 80 civilians, including women, children, held by Ukrainian nationalists were evacuated from the territory of the Azovstal plant in Mariupol. The divisions of the Russian Armed Forces and the DPR People’s Militia opened a humanitarian corridor and ensured ceasefire for safe evacuation of civilians," the statement said.

All civilians evacuated were carried to Bezymennoye in the Donetsk People’s Republic (DPR), the ministry said, adding that "the civilians evacuated by the Russian military from the Azovstal plant willing to enter the regions controlled by the Kiev regime were delivered to representatives of the UN and the International Committee of the Red Cross."

Earlier on May 1, the Russian Ministry of Defense told reporters that two groups of civilians left residential buildings adjacent to the territory of the Azovstal metallurgical plant along the humanitarian corridor on April 30.

The International Committee of the Red Cross (ICRC) is participating in efforts to evacuate civilians from the Azovstal steel plant in the city of Mariupol, the organization said in a statement.

According to the document, "an International Committee of the Red Cross (ICRC) team is currently participating in an operation to facilitate the safe passage of civilians out of the Azovstal plant and Mariupol" towards Zaporozhye. "This complex operation is conducted in coordination with the parties to the conflict and the United Nations," the ICRC noted. "As a neutral and impartial humanitarian intermediary, the ICRC has been facilitating the dialogue between the parties on the safe passage of civilians since late February," the organization added.

Ukrainian President Vladimir Zelensky announced on Sunday that the evacuation of civilians from Azovstal would resume at 8:00 am on May 2. He said earlier that about 100 civilians had been evacuated from the facility and were headed to Zaporozhye.

A group of 25 civilians, including six children, earlier left Azovstal and were taken to the Bezymennoye settlement in the Donetsk People’s Republic (DPR). Forty people were evacuated to the settlement on May 1. An eyewitness told TASS that some 300 civilians might remain at the plant.