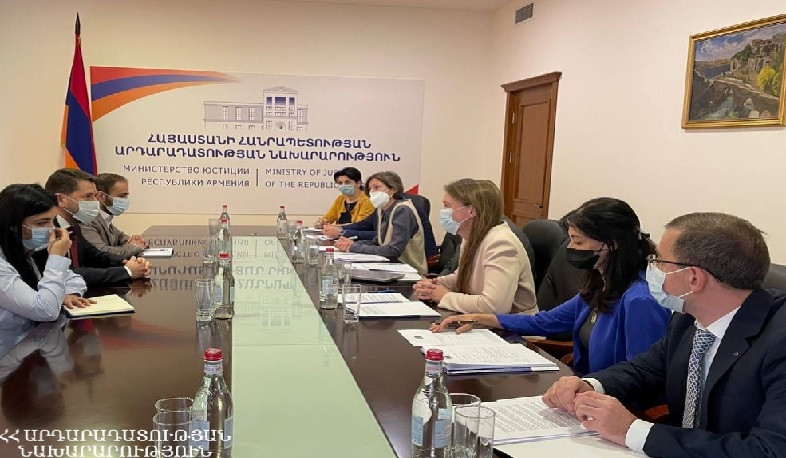 Immediate release of prisoners is a priority: Karen Andreasyan met with representatives of Council of Europe

On December 7, Minister of Justice of Armenia Karen Andreasyan received representatives of the Yerevan Office of the Council of Europe. The Minister first of all referred to the issue of immediate release of Armenian prisoners of war (POWs) being held in Azerbaijan.

Andreasyan stressed the importance of the implementation of the ECHR judgments against Azerbaijan, which refers to the people captured as a result of the 44-day war, who are still being held in Azerbaijan.

Karen Andreasyan then presented the reform agenda of the Ministry of Justice. Reference was made to the sphere of constitutional reforms, such as e-justice, compulsory execution of judicial acts, and the Probation Service.

The head of the CoE Yerevan Office Martina Schmidt thanked Karen Andreasyan for the cooperation. Schmidt stressed that the CoE-Armenia Action Plan is coming to an end in 2022, and highlighted the design of the 2023-2026 program, within the framework of which actions will be taken, which will be aimed at the reforms in the field of justice.

During the meeting, Pavlo Pushkar, Head of the ECHR Judgment Enforcement Division, presented the role of the Armenian Ministry of Justice in the implementation of ECHR judgments. The judgments of the ECHR in the case of Ashot Harutyunyan and Mushegh Saghatelyan were discussed, the existing problems in them were partially resolved, which was welcomed by all the representatives of the Council of Europe.

The Head of the CoE Yerevan Office highlighted the work carried out in the field of human rights protection. Martina Schmidt thanked the Minister for the cooperation.

During the meeting with the representatives of the Council of Europe, Minister Karen Andreasyan emphasized the transparency of the electoral process, and referred to the recent local elections.