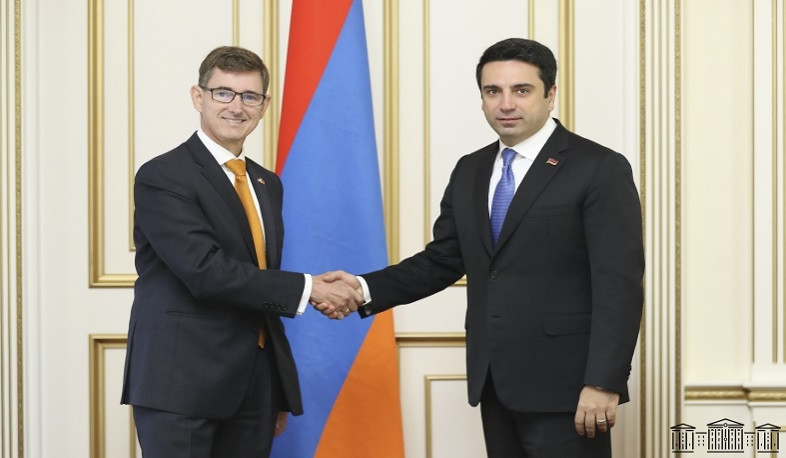 On September 16, the President of the RA National Assembly Alen Simonyan has received the Ambassador Extraordinary and Plenipotentiary of the Netherlands to Armenia Nicolas Schermers, who is the first resident Ambassador of that country to the Republic of Armenia.

Welcoming the guest, the NA President noted that he had an effective meeting with the President of the Senate of the Kingdom of the Netherlands Jan Anthonie Bruijn within the framework of the Fifth World Conference of Speakers of Parliaments recently held and invited him to pay an official visit to Armenia.

Presenting some details from the meeting, Alen Simonyan thanked the Ambassador for the substantive position of the Netherlands towards our region and for supporting democratic priorities of Armenia.

The NA President has referred to the scope of issues, where the RA expects political support from its partners. Those are the establishment of peace in our region, the urgent implementation of the repatriation of Armenian prisoners of war and civilians, and the effective implementation of the Comprehensive and Enhanced Partnership Agreement. He has underlined the destructive position of the Azerbaijani delegations at different parliamentary assemblies, emphasizing that their rhetoric is not aimed at establishing peace in the region.

Thanking the NA President for the reception, the Ambassador reaffirmed the readiness to support the activities of the Co-Chairs of the OSCE Minsk Group in the region.

The sides touched upon the development of the inter-parliamentary relations and the need to develop a roadmap promoting the further deepening of the cooperation.