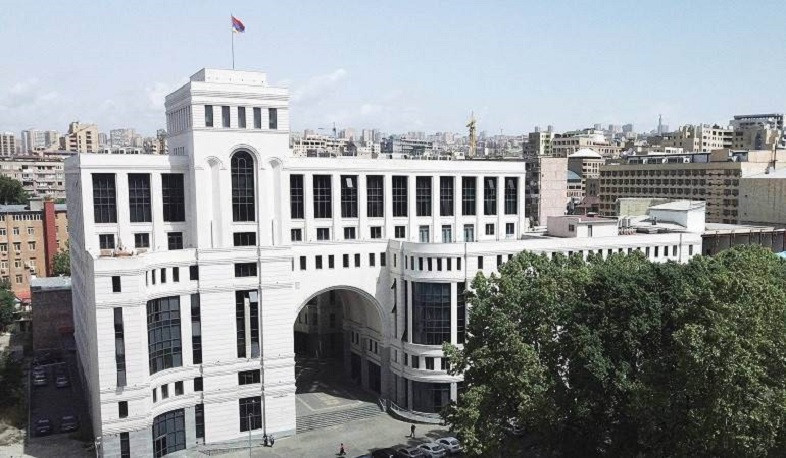 Azerbaijani side does not shy away from attributing blatant falsifications to November 9 trilateral statement: Armenia’s Foreign Ministry

By making false territorial and historical claims against Armenia, the Azerbaijani side is trying to remove the Karabakh conflict from the international agenda on the one hand, and to create new threats to regional security and stability on the other hand, Armenian Ministry of Foreign Affairs said in comments to Armenpress.

“Trying to substantiate such a fake agenda, the Azerbaijani side does not shy away from attributing blatant falsifications to the November 9 trilateral statement. If we follow the logic of Azerbaijan’s interpretation of the above-mentioned document’s reference to the displaced persons, the Armenian refugees must return to Nakhichevan, Gandzak, Baku, Sumgait, other territories of present-day Azerbaijan cleansed of Armenians,” the Ministry said.

The comments come after a statement by representative of the Ministry of Foreign Affairs of Azerbaijan containing territorial and historical claims to Armenia.

“As for the historical demands made against Armenia by the spokesman of the Ministry of Foreign Affairs of Azerbaijan, it is difficult for us to understand the criteria of Azerbaijan’s criteria of definition of the term “historical.” We have to remind again that history can never be the strong point of a country whose geographical and political name has a history of a century, and the name of Azerbaijan is even newer than that,” the Foreign Ministry stated.

“The efforts of the Azerbaijani leadership to sow and maintain lasting enmity between the Armenian and Azerbaijani peoples are a constant threat to regional peace and security. Before accusing Armenia of racism, Azerbaijan must explain to the international community the message of Baku’s “trophy park,” which is nothing but a shameful “monument” of racism and hatred,” the statement reads.

“Armenia will continue to stick to the position of realization of the right of the people of Artsakh to self-determination, the de-occupation of the territories of Artsakh subjected to ethnic cleansing and return of the Armenian population to those territories in line with the November 9 trilateral statement. Only the resumption of the Karabakh peace process under the co-chairmanship of the OSCE Minsk Group can create preconditions for local peace in the region,” the Ministry stated.