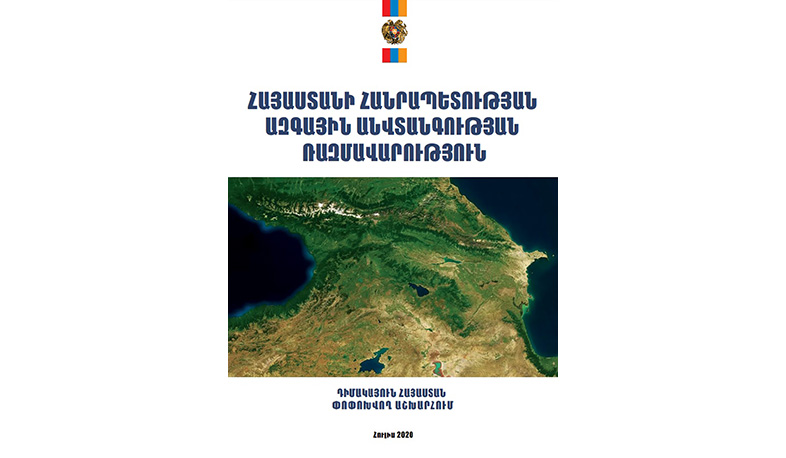 1.2 The international and regional security environment has undergone significant changes since the first National Security Strategy of the Republic of Armenia was adopted in 2007. These changes have created more sophisticated and multi-layered challenges for Armenia. Armenia itself has also changed. The non-violent Velvet Revolution of 2018 set a high standard for ensuring state security, development, and prosperity. In this new context, Armenia’s security policy hinges upon the democratic system of governance laying sound foundations for the strengthening of the country’s economic, political, intellectual, and consequently, military potential. These realities require a new and more ambitious National Security Strategy.

1.3 The Strategy is based on three fundamental principles. First, a strong and prosperous Armenia is the guarantor of its own security. There is no alternative to a strong and prosperous Armenian state for ensuring Armenia’s security. As a state interested in maintaining peace and stability, Armenia shall continually develop capacity along these dimensions and make continuous efforts towards enhancing its role in providing peace, security, and stability in the region. Armenia shall continue to invest in international security through the involvement of Armenian peacekeepers in international peace support missions, not only as a consumer, but also a provider of international security.

1.5 Third, in the constantly changing world, Armenia’s internal and external resilience should develop alongside its readiness to effectively respond to new and unforeseeable challenges. Currently, in the context of on-going, large-scale geopolitical changes, such as power shifts, the weakening of multilateral international platforms, and the erosion of mutual confidence among states, the main principles of the contemporary world order have become uncertain. Apart from addressing traditional and predictable threats, states and societies also need to counter unpredictable threats. The most salient example is the outbreak of the novel coronavirus, which shocked the health systems of the world’s leading states and plunged the global economy into a crisis. Armenia’s National Security Strategy aims to enhance resilience through a nationwide approach to planning and maintaining national security. The comprehensive provision of national security necessitates a convergence of the efforts at both the state administrative and societal levels. It is no coincidence that the Strategy includes both external political and military components together with social, economic, energy, health, scientific, information, and technological aspects of security.

1.6 In order to withstand the threats and challenges of the changing world, ensure its own security, and effectively contribute to regional and international security, Armenia shall continue to enhance its international standing. Toward this purpose, Armenia shall develop its ability to employ the full range of the power toolkit, including soft power, putting its focus on its most important resource—human capital. It is within this context of human capital that the convergence of the potential of globally dispersed Armenians is viewed.