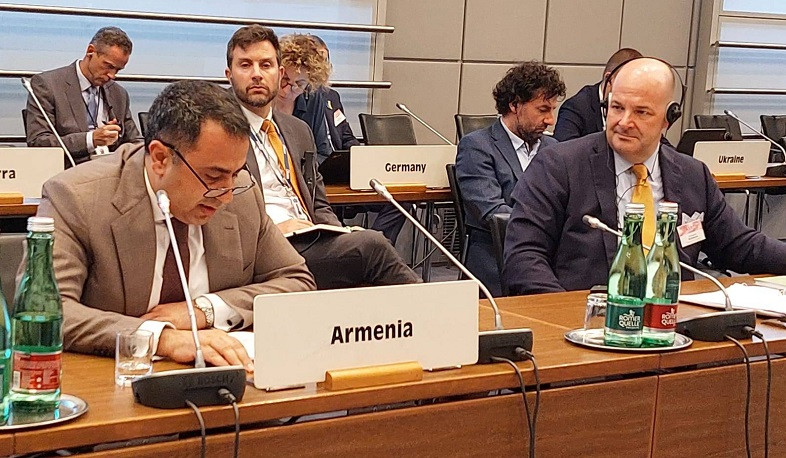 The use of force or the threat of force, the de facto continuing violations of the arms control regime, the use of foreign terrorist fighters and mercenaries in armed conflicts have called into question the OSCE’s ability to ensure comprehensive security in its area of responsibility, Armenian Deputy Foreign Minister Vahe Gevorgyan said at the OSCE’s Annual Security Review Conference.

It was mentioned that the continuous violations of the ceasefire approved by Azerbaijan in the trilateral statement of November 9, 2020, Azerbaijan’s steps to cause a humanitarian crisis in Artsakh in March this year, obstruction of the activity of the OSCE framework created for the settlement of the Nagorno Karabakh conflict show that resisting to the security challenges in the OSCE area requires effective cooperation between the participating countries and reaffirmation of the OSCE’s basic principles and commitments.
Expressing support for the OSCE Minsk Group Co-Chairs, the Deputy Foreign Minister attached importance their activities aimed, among others, at ensuring the realization of the rights of the Artsakh people to decide their own future – a key goal of the Nagorno-Karabakh conflict settlement. OSCE involvement in humanitarian issues, including the release of Armenian prisoners of war and other detainees, protection of cultural heritage, and the addressing of cases of missing persons and enforced disappearances and was also emphasized.
Within the framework of the conference, Deputy Minister Vahe Gorgyan met with OSCE Secretary General Helga Schmid. A wide range of issues of common interest was discussed.
Views 49