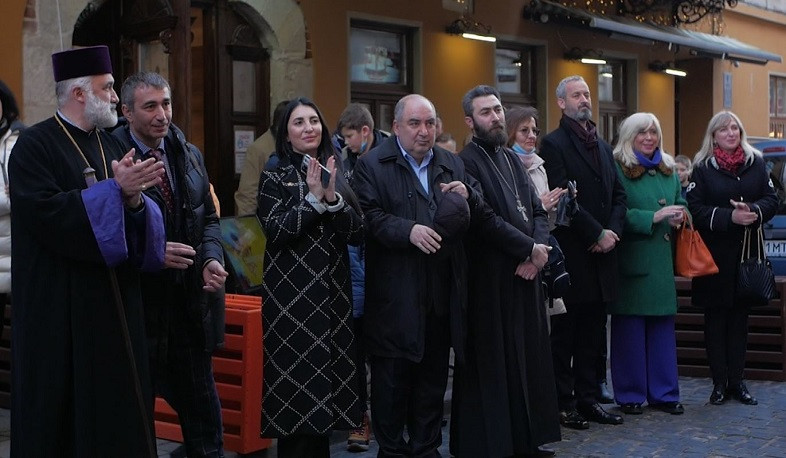 Օffice of Honorary Consul of Armenia opened in Lviv

The office of the Honorary Consul of Armenia was solemnly opened in the center of Lviv, on the street with the Armenian name, with the participation of Ambassador of Armenia to Ukraine Vladimir Karapetyan.
The opening was attended by the Primate of the Armenian Diocese of the Armenian Apostolic Church in the Ukraine, Bishop Markos Hovhannisyan, the Honorary Consul of Armenia in Lviv Norik Gevorgyan, the Governor of the Lviv Region, the Mayor of Lviv, as well as representatives of the local Armenian community.
Meetings were held with the governor of the region Maxim Kozitsky and the mayor of Lviv Andriy Sadovyi, during which the directions of the development of relations between Armenia and the Lviv region at the regional-urban levels were discussed.
"We are opening the office of the Honorary Consul in Lviv. Interestingly, it coincides with the 30th anniversary of the establishment of diplomatic relations between Armenia and Ukraine. It is an important event from the point of view of bilateral relations, especially taking into account the importance that the region, as well as the city leadership, showed at the event,” said Armenian Ambassador to the Ukraine Vladimir Karapetyan.
"The cultural and national layer that the city of Lviv has, in the form of the heritage left by our ancestors, is very important in Lviv. The consulate also increased. This is a great force to assess our integrity and to develop it,” said Bishop Marcos Hovhannisyan, the Primate of the Armenian Diocese of Ukraine.
“The city is the cultural center of Eastern Europe for Armenians. Armenians have lived here for a long time and are one of the founders of the city. I think that through joint efforts with the community we will contribute to the development of contacts between the city, our people, the Ukraine and Armenia,” added Norik Gevorgyan, Honorary Consul of the Republic of Armenia in Lviv.
Views 185