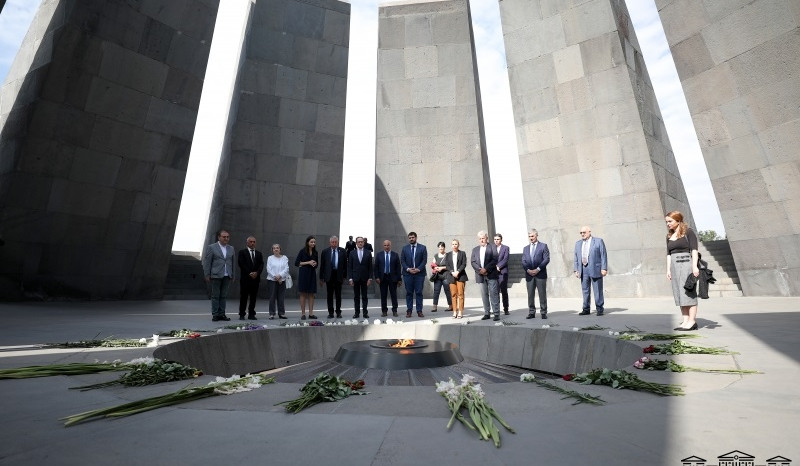 On September 17, the members of the Delegation of the Republic of France being in Armenia visited Tsitsernakaberd Memorial Complex and Yerablur Pantheon accompanied by the Chair of the RA NA Standing Committee Arman Yeghoyan and the Committee member Sona Ghazaryan.

At Tsitsernakaberd Memorial Complex the members of the Delegation laid flowers at the eternal fire perpetuating the memory of the Armenian Genocide victims and honoured in silence the memory of Holy Martyrs.

The guests got familiarized with the documents assuring the 20th century disaster shown in the Armenian Genocide Museum-Institute and left a note in the Book of Honourable Guests.

“This is my 38th visit to Armenia. Our Delegation also visited Artsakh and took part in the opening of Paul Éluard Francophone Centre in the city of Stepanakert. The Centre will consolidate around it all Francophones, serving as an educational and innovative platform promoting the development of the city. Every time coming to Armenia, I also visit Tsitsernakaberd Memorial Complex and honour the memory of the victims with pain sadness and silence. This Memorial Complex is a huge place. As a humanist, it is everybody’s duty to come and pay tribute to the memory of the victims,” the President of the Union Francophonie in Artsakh, the First President of France-Artsakh Friendship Circle François Rochebloine.

In Yerablur the Members of Delegation paid tribute to the memory of the heroes, who sacrificed their lives for the Motherland.