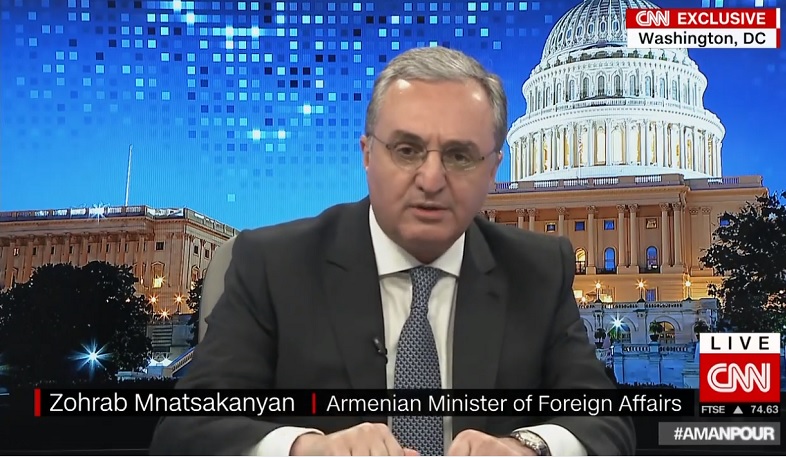 The issue of Artsakh is an issue of people's lives. Mnatsakanyan to CNN

The RA Foreign Minister Zohrab Mnatsakanyan said during CNN's "Amanpour" TV program that the Artsakh issue is a matter of people's lives.
"While in Washington we were trying to implement the ceasefire once again and raised the need for it, I received information from Nagorno Karabakh that the cities of Stepanakert, Martuni and Hadrut were again heavily bombed. Civilians are dying. The humanitarian situation is terrible", he said.
Christiane Amanpour asked - why Mnatsakanyan calls Nagorno Karabakh Armenian, if some UN resolutions called the presence of Armenian forces there an occupation ?. Zohrab Mnatsakanyan answered. "In 1992-1993 a situation was created when the Armenians of the adjacent regions of Karabakh were subjected to ethnic cleansing. The Armenian Armed Forces were able to take the surrounding areas, ensuring the physical security of the Armenians.
The current situation proves that if it were not that security zone, Armenians would be subjected to ethnic cleansing again. Today, the ultimate goal is to reflect and strengthen the right of our compatriots to self-determination in the final document, through negotiations".
Mnatsakanyan also stressed that the words of the RA Prime Minister Nikol Pashinyan in Artsakh (in August last year) were presented to the international community in a one-sided way. According to him, Pashinyan stressed that Armenia has been and is the only guarantor of the security of the people of Artsakh.
Views 3852