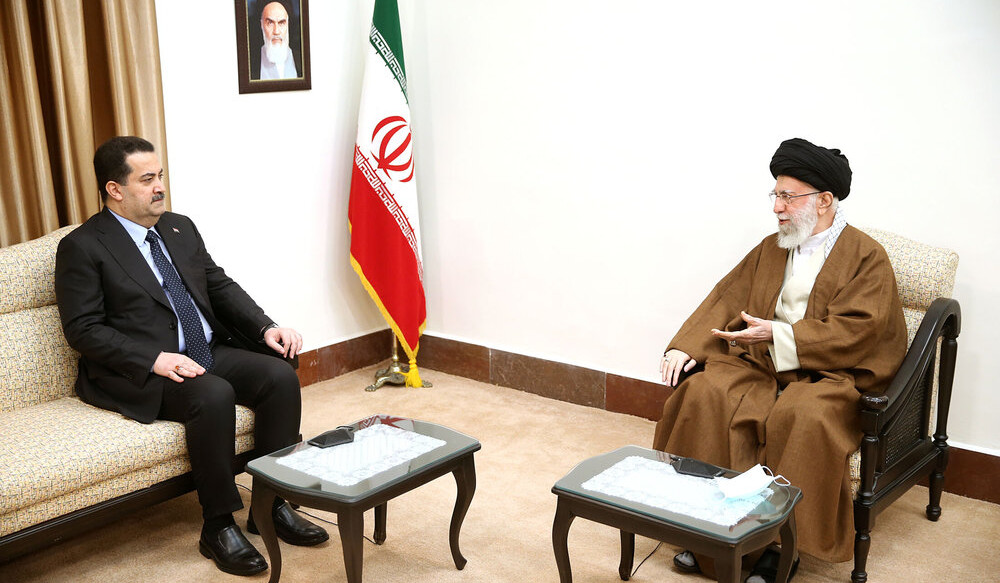 In his first visit to Iran since taking over as Iraq’s premier, Mohammad al-Sudani visited Tehran on Tuesday at the invitation of Iranian President Ebrahim Raisi, Tehran Times reports.

Al-Sudani met with the Leader of the Islamic Revolution, Ayatollah Seyed Ali Khamenei.

In the meeting, Ayatollah Khamenei praised Iraq’s position in terms of national and human resources, saying that despite these resources Iraq has been unable to reclaim its lofty position among nations. He expressed hope that under al-Sudani, Iraq will achieve its true position and make progress.

Ayatollah Khamenei also pointed out that Iran has faced insecurity coming from Iraqi soil, adding that the only solution to this problem is that the central government of Iraq extend its authority over those regions of Iraq.

The Leader also said that Iran will defend Iraq in the face of any efforts to create insecurity in the Arab country.

Ayatollah Khamenei said there exist some wills that understandings and cooperation between Iran and Iraq not implemented. “We must overcome these wills with action,” he added.

The Iraqi prime minister, for his part, underlined the new government of Iraq’s determination to implement the deals between Iran and Iraq.

Regarding security issues, al-Sudani underlined the intertwining of Iran and Iraq’s security, noting that Iraq will not allow any parties to create insecurity from Iraqi soil.

Upon his arrival, the Iraqi prime minister was received by President Raisi and accorded an official reception at the presidential complex of Sa’adabad.

After the official reception ceremony, al-Sudani and Ayatollah Raisi held a meeting in which they discussed a variety of bilateral, regional, and international issues. In the meeting, Raisi expressed satisfaction with the political stability and the formation of the new Iraqi government and said, “The Islamic Republic of Iran always welcomes and supports a united nation and a strong government in Iraq.”

He added, “Iran seeks to develop exchanges with Iraq in various commercial and energy fields, and holding regular meetings of the Cooperation Commission of the two countries can play an effective role in realizing this goal.”