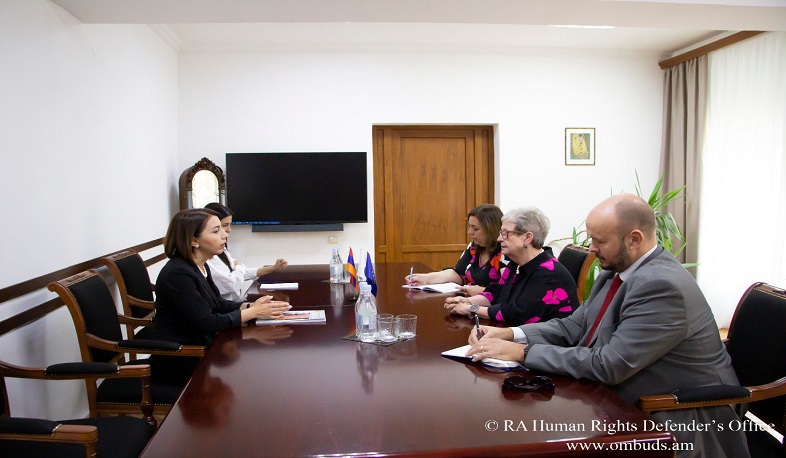 The Human Rights Defender, Ms. Kristinne Grigoryan, received the head of the EU Delegation to Armenia, Ambassador Andrea Wiktorin and representatives of the Delegation, the HDR office reports.
The Ambassador specifically thanked the Defender Ms. Grigoryan and the Human Rights Defender’s Office for the work done during these days.
Kristinne Grigoryan presented the ad hoc report published by the Human Rights Defender on September 16 and the facts from the closed part about the damages caused to the civilian population and civil infrastructures, the environment, and other crimes prohibited by international humanitarian law as a result of the Azerbaijani attack.  Grigoryan briefed about the crimes committed by Azerbaijani servicemen against Armenian prisoners of war and dead military personnel.
The Defender also pointed out that the fact-finding activities continue after the publication of the ad hoc report. On September 17, the HRD working group visited  Gegharkunik, Vayots Dzor and Syunik: communities  affected by the attacks of Azerbaijani army. "The most important thing for us to do is to meet and talk to people affected by the Azerbaijani attack," the Defender said during the meeting.
The Ambassador expressed her gratitude to the HRD for the fact-finding work and the reports which were sent earlier. "It is very important to have well-founded data, so we can clearly state: yes, this is a fact, it’s verified," said Ambassador Andrea Wiktorin.
The Defender emphasized the work carried out with international partners and expressed her gratitude to the Ambassador Andrea Wiktorin and the representatives of EU Delegation.
At the end of the meeting, parties discussed how they can cooperate to help people affected by Azerbaijani attacks.
Views 168