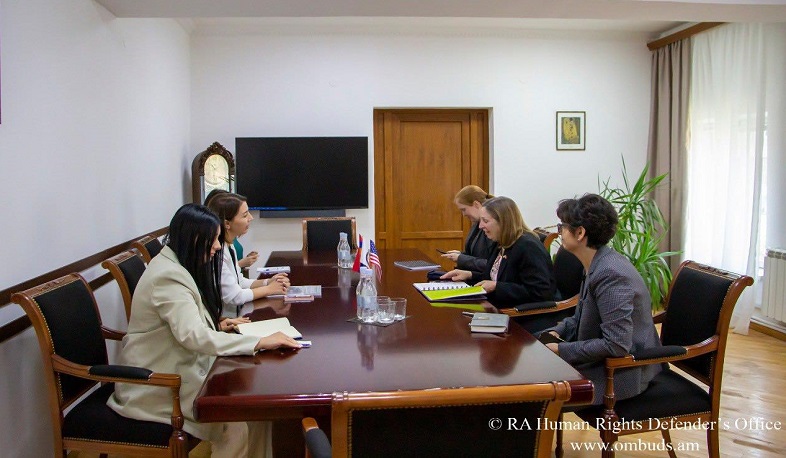 Today, on September 20, 2022, the Human Rights Defender Ms. Kristinne Grigoryan received the Ambassador Extraordinary and Plenipotentiary of the United States of America H.E Ms. Lynne Marie Tracy, and the representatives of the Embassy.
The Ambassador specifically thanked the Defender Ms. Grigoryan and the Human Rights Defender’s Office for the large-scale and beneficial work they conducted during these days.
Ms. Kristinne Grigoryan informed the Ambassador about the damage caused to the civilian population and civilian infrastructure as a result of the Azerbaijani military attack on Armenia, as well as other acts prohibited by International Humanitarian Law.
The Defender also presented to the Ambassador about the crimes committed by Azerbaijani servicemen against Armenian Prisoners of War and the bodies of killed Armenian servicemen; the Defender also referred to the cause of these crimes, which is the state-sponsored policy of Armenophobia of the highest authorities of Azerbaijan.
The Defender also presented to the Ambassador the printed version of the ad hoc report of the Human Rights Defender, which analyzes the facts of the gross violations of human rights during and as a result of the Azerbaijani military attack.
The Ambassador of the United States highlighted the fact that the Human Rights Defender’s Office provided information to its partners, and put diligent efforts to verify the collected information since the beginning of the Azerbaijani military attack.
The Defender also presented the conclusions of the visits conducted by the fact-finding groups of the Human Rights defender’s Office to Gegharkunik, Vayots Dzor, and Syunik provinces.
Moreover, the Defender noted that it is particularly important for our international partners to familiarize themselves with the situation on-site, and to hold conversations with the residents, inter allia, to realize the humanitarian and psychological consequences of the Azerbaijani military attack.
At the conclusion of the meeting, the Defender thanked the Ambassador for the constant effective communication and for the high level of cooperation.
Views 342