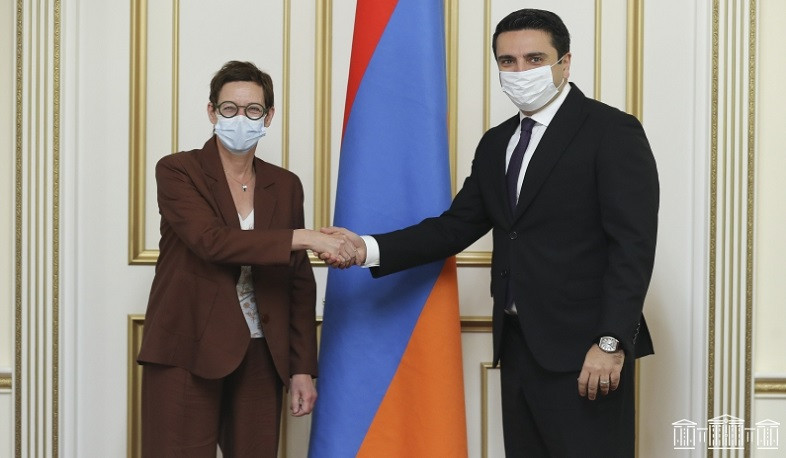 On October 18, the RA NA President Alen Simonyan received the Ambassador Extraordinary and Plenipotentiary of France to Armenia Anne Louyot.
Congratulating the newly appointed Ambassador, Alen Simonyan expressed conviction that her activities would promote the deepening and strengthening of cooperation between Armenia and France.
The NA President has underlined the cooperation with France in many spheres, adding that he personally is ready to make all efforts in deepening and dynamically developing those relations. In this context the role of the Armenian community of France has also been noted, which is a unique bridge in the Armenian-French multi-polar collaboration.
Alen Simonyan mentioned with gratitude numerous resolutions and appeals on the necessity of condemning the Azerbaijani-Turkish aggression against Artsakh by two chambers of Parliament of France and recognition of the Nagorno Karabkh Republic and the visit of already the fourth delegation to Armenia and Artsakh.
The NA President highlighted the final and the just solution of the Nagorno Karabakh problem within the framework of the OSCE Minsk Group Co-Chairmanship and the recognition of the status based on the right to self-determination of Artsakh.
At the meeting the activities of parliaments of two countries have been touched upon which play an important role in developing and enriching the political dialogue between Armenia and France.
The Ambassador of France has thanked the NA President for the reception, stressing that the National Assembly is considered a centre of democracy. She expressed readiness to foster the deepening of the firm cooperation formed with the NA with her further activities.
Views 81