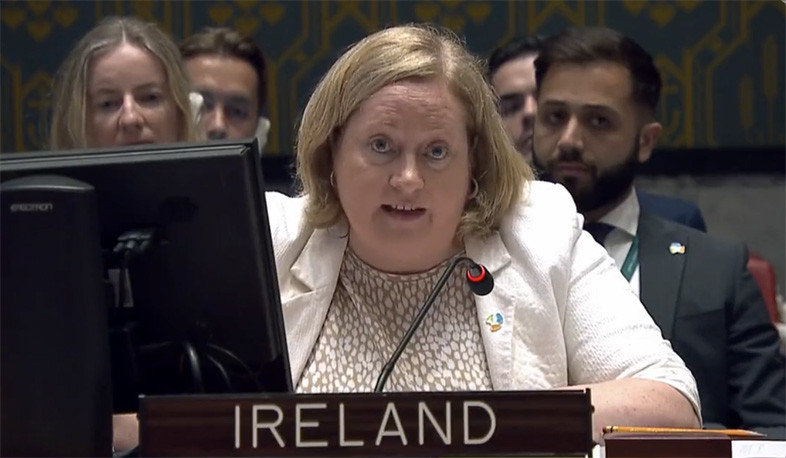 Ireland is deeply concerned by reports of attacks directed at critical civilian infrastructure inside Armenian territory: Irelan Ambassador to UN

Ireland Ambassador to UN  Cáit Moran’s Statement at the UNSC Briefing on aggression by Azerbaijan against Armenia.
“Ireland is deeply concerned by the serious fighting that has broken out along the Armenia-Azerbaijan border in recent days, including reports of attacks directed at critical civilian infrastructure inside Armenian territory, which are prohibited under international humanitarian law.  We regret the reported loss of life.
Ireland welcomes the updated by ASG Jenča on the cessation of hostilities. It is vital that the sides exercise maximum restraint and refrain from a further escalation in violence. We urge them to commit to this ceasefire, and respect prior international agreements.
We emphasise the absolute need to adhere to the UN Charter. Violations of the sovereignty and territorial integrity of states are never acceptable.
All forces must urgently return to the positions they held before this regrettable escalation in hostilities. No forces should remain on the territory of another sovereign state.
Mr. President,
In Armenia and Azerbaijan, as elsewhere, violence can never be the answer.
A sustainable resolution to the conflict is only possible through dialogue and diplomacy. We know that inclusive dialogue and diplomacy, with women at the table and with their meaningful participation ensured, delivers stronger and lasting peace.
There can be no alternative path to lasting peace and security in the region.
ASG Jenča, we welcome the UN’s readiness to step-up its mediation efforts upon request.
The European Union is undertaking immediate efforts to support the necessary de-escalation in hostilities.
The European Union remains committed to acting as an honest broker between Armenia and Azerbaijan, including through the Brussels dialogue process.
Ireland, together with our EU partners, continues to support renewed efforts towards a negotiated, comprehensive and sustained settlement of the broader conflict, particularly on the long-term status of Nagorno-Karabakh.
We support the common goal of a South Caucasus that enjoys peace, security and prosperity. That is what its people deserve”.
Author:Davit Muradyan
Views 161