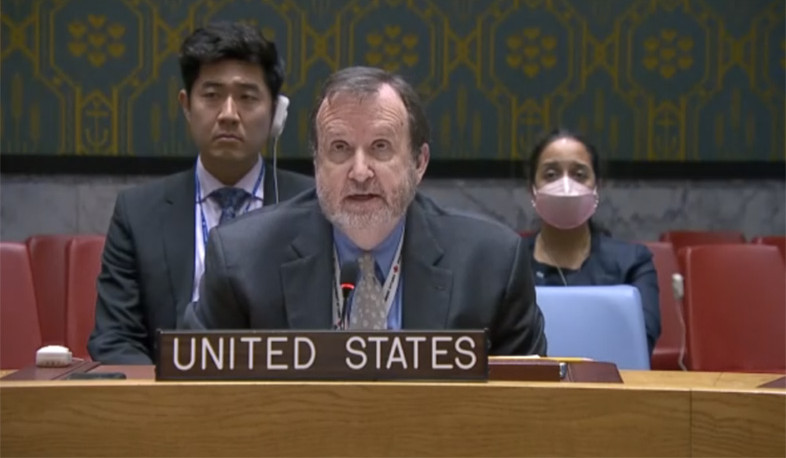 We are deeply troubled over the reports of shelling of civilian infrastructure in Armenia: Ambassador Richard Mills

U.S. Deputy Representative to the United Nations Ambassador Richard Mills’s remarks  at the UNSC Briefing on aggression by Azerbaijan against Armenia.
“Mr. President. Thank you, Secretary General Jenča for your useful briefing this morning. Let me begin by noting that we are deeply troubled over the outbreak of violence along the Armenia and Azerbaijan border, including reports of shelling of civilian infrastructure in Armenia. We offer our condolences to the families of those killed and injured in this renewed violence.
The United States has engaged with Armenian and Azerbaijani officials and conveyed our deep concern over military actions along the border. We are particularly disturbed by reports of civilians being harmed inside Armenia. All sides must fully observe their obligations under international humanitarian law, including those related to protection of civilians.
Mr. President, like others the United States welcomes the cessation of all hostilities and encourages both parties to continue to exercise restraint. Military forces should disengage to allow both parties to resolve all outstanding issues through peaceful negotiations. There is an urgent need to return to talks aimed at a lasting, peaceful resolution to the conflict and the normalization of relations between Armenia and Azerbaijan.
I want to be clear today: the United States is firm – there can be no military solution to the conflict. We encourage both governments to re-establish direct lines of communication across diplomatic and military channels, and to recommit to the diplomatic process. A negotiated, comprehensive settlement of all remaining issues between Armenia and Azerbaijan is needed. And the international community must continue to engage diplomatically to help broker a lasting peace.
The United States is dedicated to a sustainable ceasefire and peaceful resolution. Secretary Blinken spoke with Armenian Prime Minister Pashinyan and Azerbaijani President Aliyev to convey our deep concern over military actions along the border. And Ambassador Phil Reeker, our Senior Advisor for Caucasus Negotiations, is in the region meeting with senior Azerbaijani and Armenian leaders.
The United States is committed to promoting a peaceful, democratic, and prosperous future for the South Caucasus region. We urge the parties to intensify their diplomatic engagement and to make use of existing mechanisms for direct communication to find comprehensive solutions to all outstanding issues related to and resulting from the conflict.
We stand ready to facilitate dialogue between Armenia and Azerbaijan bilaterally, through the OSCE, and in coordination with partners, in order to achieve a long-term political settlement to the conflict, in accordance with international law, including the UN Charter, as well as the Helsinki Final Act. Thank you. Mr. President”.
Author:Davit Muradyan
Views 804