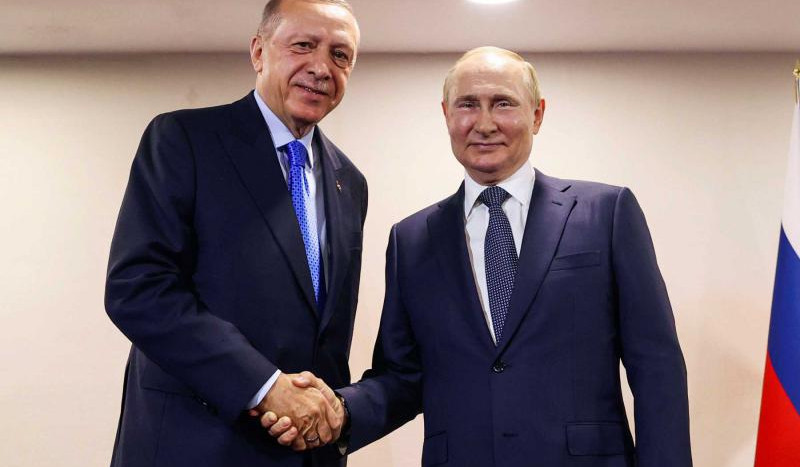 The Russian and Turkish Presidents - Vladimir Putin and Recep Tayyip Erdogan - began talks in the narrow format in the Green Hall of the Imperial Building of the Rus health resort in the Black Sea city of Sochi on Friday, TASS reports.

As Kremlin Spokesman Dmitry Peskov announced earlier, the negotiations are scheduled to touch upon a wide range of bilateral cooperation as well as regional and international issues. Thus, the leaders are expected to focus on the Russian-Turkish multifaceted cooperation, including the prospects for broader trade and economic ties in the future and the implementation of joint strategic energy projects, and to share views on exports of Ukrainian grain, on Ukraine, Syria and Nagorno-Karabakh.

Ankara views the Sochi talks between Erdogan and Putin as a follow-up to their meeting in Tehran on July 19 on the sidelines of the Astana troika summit.

Russia and Turkey have done much to normalize the situation in Syria, Putin said at a meeting with Erdogan.

"Naturally, we will speak about the problems we have been dealing with for quite a long time. I mean issues of the security in the region, first of all the Syrian crisis," he said at the beginning of the talks.

"Turkey and Russia have made a very big contribution to the normalization of the situation, And we will discuss this topic as well," he added.

Russia, Turkey, and Iran are the guarantor nations of the settlement of the Syrian conflict. They have also initiated the so-called Astana format of political settlement in Syria. The first talks in this format took place in Kazakhstan’s capital city in January 2017.

Putin personally thanked Erdogan for his role in the achievement of the grain agreements, which include export of Russian food and fertilizer.
"With your personal participation and with mediation from the UN Secretariat, the issue of export of Ukrainian grain from Black Sea ports was resolved. The shipments have already commenced, and I would like to thank you for that, as well as for the fact that a package agreement on export of Russian food and fertilizer to global markets was adopted simultaneously," Putin said.
He underscored that this issue is relevant "for very many countries, especially for the developing ones, which stand on the verge of major problems with food and fertilizer."
"It is all these countries that such decisions, which happened with your direct involvement, are particularly important for. I would like to thank you for that," the Russian leader concluded.
Putin expressed his hope that the talks in Sochi will make it possible to sign a memorandum on development of trade and economic ties between the two countries.
"As we agreed, I hope that we will be able to sign the corresponding memorandum on development of our trade and economic ties today, with consideration of the agreements, achieved by our delegation during its work in Turkey," the Russian leader said.
He added that Erdogan is in general welcome in Sochi.
Views 24