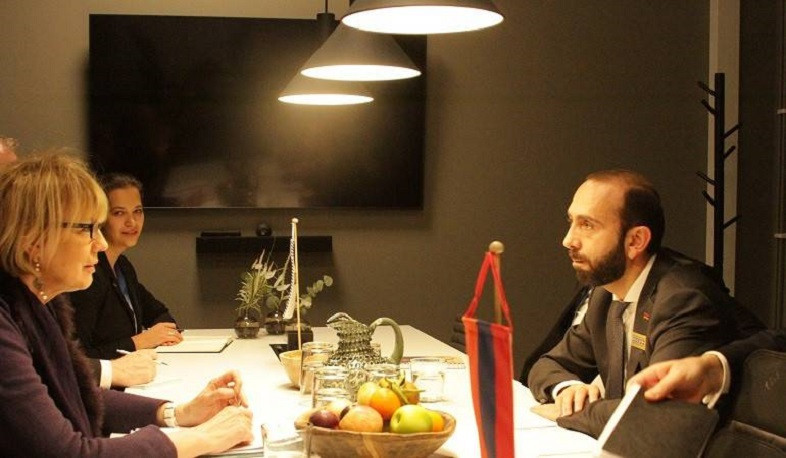 Meeting of Foreign Minister of Armenia with OSCE Secretary General

On December 2, within the framework of the 28th OSCE Ministerial Conference, Foreign Minister of Armenia Ararat Mirzoyan held a meeting with OSCE Secretary General Helga Schmid.

Minister Mirzoyan emphasized the effective cooperation of Armenia with the OSCE and its executive structures, as well as the implementation of projects within the three OSCE dimensions aimed at strengthening the concept of comprehensive and cooperative security. The sides also touched upon the prospects of further development of the Cooperation Program of Armenia (ACP).

Ararat Mirzoyan presented the situation created by the aggression unleashed by the Azerbaijani armed forces against the sovereign territory of the Republic of Armenia.

The Minister of Foreign Affairs of Armenia reaffirmed the position of the Armenian side on the de-escalation of the situation and the establishment of lasting peace in the region, meanwhile emphasizing that the continuous provocative actions of the Azerbaijani side, the Armenophobic and warmongering rhetoric of the top the Azerbaijani leadership undermine the efforts in that direction.

Touching upon the humanitarian issues resulting from the 44-day war, Minister Mirzoyan stressed the need for unconditional repatriation of Armenian prisoners of war, hostages and other detainees held in Azerbaijan. He also emphasized the preservation of Armenian historical and cultural heritage in the territories of Artsakh fallen under the Azerbaijani control.