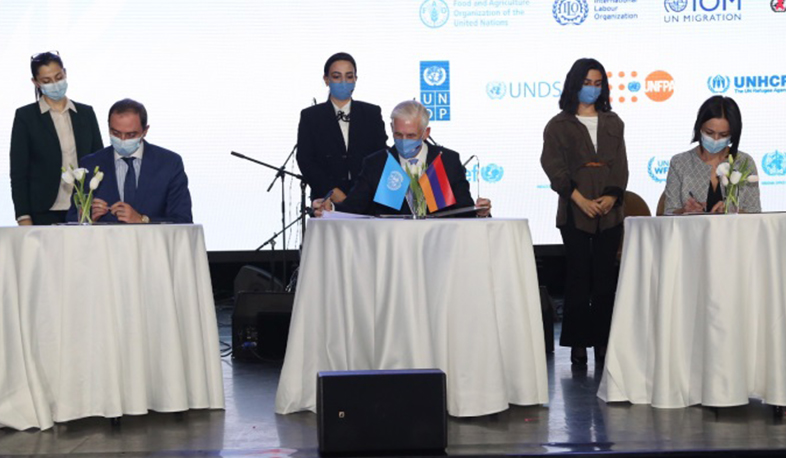 UN Resident Coordinator Shombi Sharp summed up the UN activities in Armenia. According to him, the UN efforts in Armenia are aimed at the growth of democracy, to make life more prosperous in all spheres of society, to the active participation of a citizen in public life. “Our goal is to work together to make human capital better through education, healthcare, harnessing the potential of young people, improving the functioning of markets at all levels, and creating an inclusive green economy and advanced people-centered management systems.”

On behalf of the Government, the RA Deputy Prime Minister Mher Grigoryan congratulated on the UN Day, wished fruitful work in fulfilling the mission of the organization, and stated that Armenia is ready to continue the efforts aimed at achieving the goals of peace, security and sustainable development.

During the event, on the eve of the 30th anniversary of Armenia’s membership in the UN, a trilateral memorandum was signed between the United Nations in Armenia, Armenia’s Ministries of Education, Science, Culture and Sports, and High Tech Industry.

The signatories were UN Resident Coordinator Shombi Sharp, Deputy Minister of Education, Science, Culture and Sports, Zhanna Andreasyan and Deputy Minister of High Tech Industry Robert Khachatryan. Shombi Sharp presented the contents of the memorandum, according to which stamps will be issued within the framework of the 30th anniversary, which will be developed as a result of a nationwide “student” competition. The winners’ entries will be presented on stamps. With the new initiative, the potential of art and youth will be used for the development of the state, shaping the vision of the future through art.

Summing up the meeting, Shombi Sharp also stressed the importance of Armenia’s role in the UN.

“Armenia has played a leading role in the UN, starting with the participation in the process of raising awareness about the punishment and prevention of the crime of genocide, the development of mechanisms.”

He thanked his colleagues for working together for about 4 years, calling them “wonderful years, a journey together that was full of both joy and sorrow.”