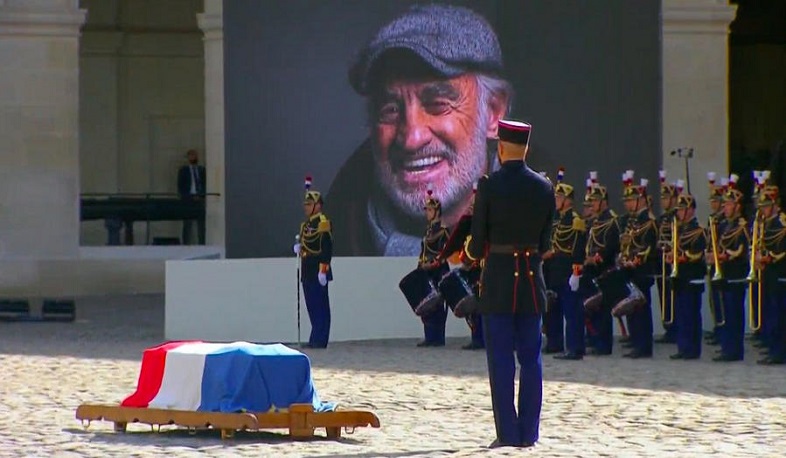 Belmondo's burial in the Saint-Germain-des-Pres church in Paris's Latin Quarter came a day after thousands turned out to honour the actor who died this week aged 88 at an official ceremony led by President Emmanuel Macron.

Among them was 85-year-old Delon, who like his friend Belmondo was the face of French New Wave cinema in the 1960s and 70s.

Delon, who had been absent from the week's official ceremonies, arrived at the church smiling and holding a single crutch, as a crowd of onlookers applauded him and chanted his first name.

Many other cinema heavyweights were among the mourners, including director Claude Lelouch and actor Pierre Richard, famous for roles in 1970s comedies, on crutches.

Jean Dujardin, best-known for "The Artist", was also there, as was Cannes film festival boss Thierry Fremaux.

"This is the last time we're with him, but he'll be always be with us, always," Fremeaux told AFP.

Many of the fans present were much younger than Belmondo, such as star DJ Bob Sinclair.

Hundreds of onlookers tried to get a glimpse of the arriving celebrities, pushing against police barriers or watching from nearby cafes.

Among them was Californian Cynthia Levine who told AFP that she had seen Belmondo a few times lunching at the Brasserie Lipp, a Parisian restaurant, over the years. "He was magnificent, very kind, very handsome," she said.

"His charm was so French," added another onlooker, 56-year-old Gerald Schmite.

Belmondo first came to fame as part of the New Wave cinema movement with films like "Breathless" and "Pierrot Le Fou" by Jean-Luc Godard that helped define French cool in the international imagination.

He went on to become a household name, acting in 80 films covering a multitude of genres, including comedies and thrillers.

Belmondo was also often called "Le Magnifique" (The Magnificent), after a 1970s secret agent satire in which he starred.