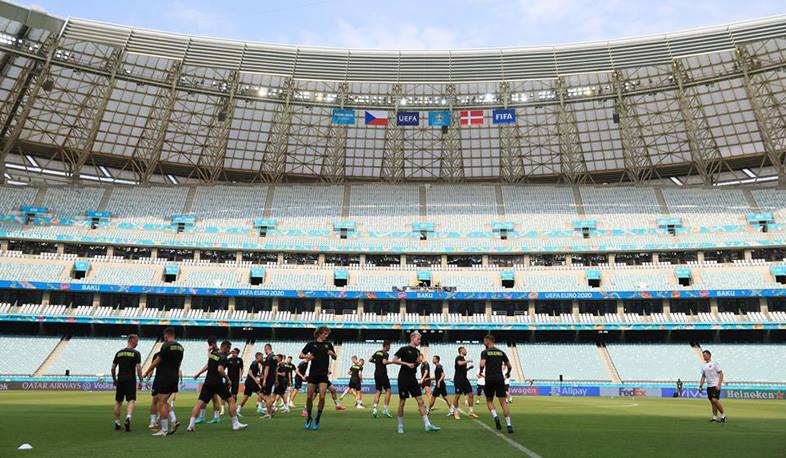 Samindra Kunti, freelance journalist, covering European and international soccer and based in Belgium, wrote an article about Azerbaijan’s sportswatching culminates in Forbes.
The author of the article wrote that in 1998, Denmark and the Laudrup brothers almost eliminated Brazil from the World Cup in a stupendous quarter-final as Rivaldo’s wizardry ultimately prevailed. This Saturday, the Danish will play the Czech Republic in their biggest match, with a place in the last four of Euro 2020 at stake, since that glorious afternoon in Nantes. However, the backdrop will be very different. No curvy shapes of the Stade de la Beaujoire, but instead an Olympic Stadium with a running track in Baku, the capital of Azerbaijan.
No more than thousand Danish supporters will attend the quarter-final on the shores of the Caspian Sea. Travel distance - more than 1,900 miles - and flight fares have discouraged the fans, who, at a rambunctious Parken, roared Kasper Hjulmand’s team to victory against Russia, a renaissance following the dramatic collapse of Christian Eriksen on the second day of the tournament. Above all, Baku’s hosting has once again prompted a debate in Denmark over staging sporting events in countries that disrespect human rights.
The Danish FA, the DBU, has pointed at the government and vice versa. Hjulmand has said a policy or plan is needed for the future. The coach and his players of course can’t be blamed alone for the predicament of playing in Azerbaijan, where human rights abuses are “abysmal” under president and dictator Ilham Aliyev.
“Azerbaijan has been systemically cracking down on dissenting voices in the country, decimating the civil society since 2014,” Giorgi Gogia from Human Rights Watch told me. “Almost a decade ago, Azerbaijan had one of the most vibrant civil societies in the region. It is almost completely decimated by now. The laws it has adopted make the environment for NGOs restrictive. The country is closed for international scrutiny. Azerbaijan has arrested government critics on various bogus and spurious charges. It has an issue of political prisoners. Freedom of expression, freedom of assembly, freedom of media, freedom of association - those are all rights that are routinely violated in the country.”
Human Rights Watch has also repeatedly reported that Azerbaijani forces abused Armenian prisoners of war from the 2020 Nagorno-Karabakh conflict, “subjecting them to cruel and degrading treatment and torture either when they were captured, during their transfer,” part of a larger, destructive Azerbaijani campaign against Armenians.
But Aliyev has been laundering Azerbaijan’s reputation by staging high-profile sporting events, the way China, Qatar, Rwanda and Belarus, among others, have done. The country has staged the European Games, Formula 1 races, the 2019 Europa League final and Saturday’s quarterfinal marks the fourth and last Euro 2020 match in Baku. That’s no coincidence according to Danish investigate journalist Jan Jensen. Azerbaijan's autocratic ruler whitewashes his oppressive regime with high-end football and Uefa, sadly, has been all too willing to oblige.
“It is kind of strange that SOCAR (State Oil Company of the Azerbaijan Republic), with no track record in European football, got this big sponsorship with Uefa in 2013 and the next year Uefa had this plan to play the European Championship in different countries" said Jensen.
“Suddenly, which was one of the countries and stadium? It is hard to see the why behind Baku - Azerbaijan is not a big football nation. You could have chosen a lot of other places. In Stockholm, you have a brand new stadium and Sweden is a big football country, but you can’t say the same about Azerbaijan. The contract with Uefa ran out this year, so it was obviously because they wanted to be part of Euro 2020.”
On Saturday, the spotlight returns to Baku in a final chapter of sportswashing. “We don’t call for boycotts,” says Gogia. “We wouldn’t say that Uefa or Fifa shouldn’t organize matches in country A or B. It’s important that they should use the opportunity to engage with the high-level leadership of the country to tell them and insist on fundamental freedoms.”
Author:Maro Tarverdyan
Views 20