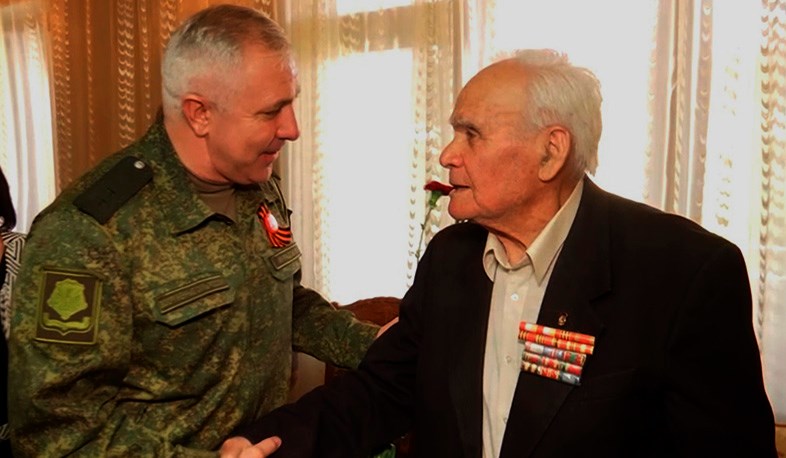 The command of the Russian peacekeeping contingent in Artsakh (Nagorno-Karabakh) congratulated the veterans of the Great Patriotic War of 1941-1945 on the 76th anniversary of the Victory, the Russian Defense Ministry reports.

The commander of the Russian peacekeeping contingent in Artsakh, Hero of Russia, Lieutenant General Rustam Muradov came to congratulate Sergey Eremovich Bagseghyan, a veteran of the Great Patriotic War who is the chairman of the Council of Veterans of the city of Stepanakert, Artsakh. Sergey Eremovich was drafted in 1943 and went to serve on the 1st Ukrainian Front. He participated in the liberation of the Ukraine and Czechoslovakia and returned home only in 1946.

Colonel Igor Sivakov, head of the Humanitarian Response Center, visited Sergey Bakhshiyevich Arzumanyan, a machine gunner who participated in the liberation of Kiev, Vinnitsa and Zhitomir from the German occupation forces. During the liberation of Zhitomir, Sergey Bakhshievich was seriously wounded and was in the hospital for more than 7 months. He met Victory Day in 1945 in the naval aviation unit in Nikolaev, where he was transferred after being discharged from the hospital.

On the eve, the command of the Russian peacekeeping contingent visited 11 veterans who are in good health today and live in the city of Stepanakert. Warm words of gratitude were expressed to each of them for the Victory in that terrible war, bouquets of red carnations were presented and memorable gifts prepared by Russian peacekeepers were handed over. In addition, the artists of the song and dance ensemble of the Aerospace Forces of Russia presented each veteran with a creative gift, performing songs of the war years for them to the accompaniment of an accordion.