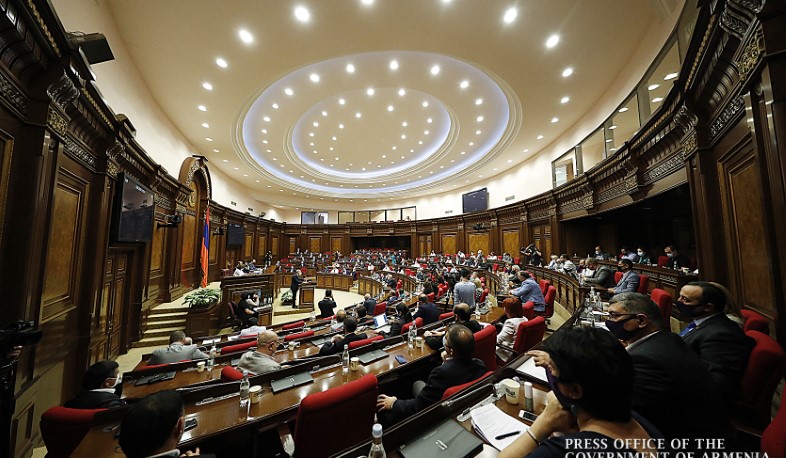 Today, with 118 votes in favor, the National Assembly approved the draft Statement on Condemning the Military Aggression Unleashed by Azerbaijan against the Artsakh Republic on September 27, 2020.

“Condemning the military aggression unleashed by Azerbaijan against the Republic of Artsakh on September 27, 2020

The National Assembly of the Republic of Armenia strongly condemns the military aggression and large-scale armed attack unleashed by the Republic of Azerbaijan against the Republic of Artsakh in the morning of September 27, 2020, which grossly violated the principle of resolving international disputes exclusively by peaceful means.

These criminal actions by the military-political leadership of Azerbaijan, including the targeting of peaceful settlements with large-caliber weapons, indiscriminatory attacks on civilians and civilian infrastructure, as well as the previous aggression in Tavush in July 2020, constant belligerent and anti-Armenian rhetoric aimed at eviction of Armenians from Artsakh once again prove that the Azerbaijani government is a real threat to the existence of the Armenians of Artsakh, the security of Artsakh Republic and the Republic of Armenia, the whole Armenian nation, as well as the security of the whole region. Therefore, all self-defense operations carried out by the Armenian Armed Forces are aimed at neutralizing this danger.

Military actions against the civilian population - the elderly, children, women are prohibited not only by the international law, but in all civilizations, all world religions and confessions.

The international community must take active measures to restrain Azerbaijani aggression as well as Turkish continuous aspirations to intervene in the Nagorno-Karabakh conflict that will lead to the extreme destabilization in the region, posing a direct threat to international peace and security.

Such kind of adventurism by Azerbaijan, carried out with the apparent support of Turkey, is a gross violation of international law, which must receive the targeted legal-political assessment by the international community.

We urge our international partners to unequivocally condemn  this aggression of authoritarian Azerbaijan against democratic Artsakh and call on international community to draw a distinction between hatred and humanity.

The National Assembly of the Republic of Armenia reaffirms that the Armenian side remains committed to the peaceful settlement of the conflict within the framework of the OSCE Minsk Group Co-Chairs.  At the same time, as the guarantor of the security of the Artsakh Republic, Armenia will not hesitate to take all the necessary measures to protect the security of the Artsakh Armenians as well as the expression of the will of self-determination”.

The NA Speaker Ararat Mirzoyan read the statement. Before the beginning of the sitting, the deputies observed a minute of silence in memory of victims of the Artsakh war.