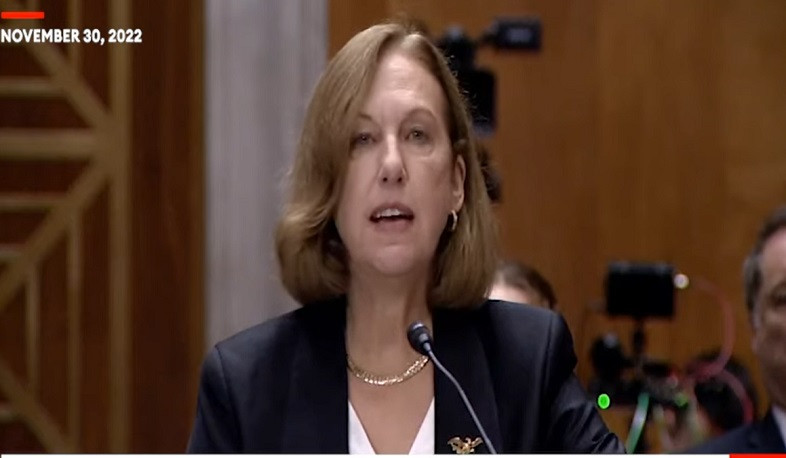 US Ambassador to Armenia nominee acknowledges Armenian Genocide, pledges to work for supportin democracy in Armenia

The US Senate Foreign Relations Committee conducted hearings directed at considering President Joe Biden’s nomination of Kristina Kvien to serve as the next US Ambassador to Armenia.
In her speech the career diplomat said: “I appreciate the leadership of the members of this Committee and your work across Europe to resolve conflicts and support reforms in young democracies.  I know first-hand that bipartisan support at home puts the United States in the strongest position to advance U.S. interests abroad.  My recent diplomatic experience in Ukraine has only reinforced for me the importance of supporting the right of every country to choose its own path, forge its own alliances, and defend its own economic and political interests in line with the desires and aspirations of its people.  If confirmed, I pledge to work with you to strengthen Armenia’s democracy, security, and economy… in a word, its sovereignty.
If confirmed, I would prioritize the safety and security of American citizens and our talented Embassy team and their families.  I would also continue the efforts of my distinguished predecessor, Ambassador Lynne Tracy, to support Armenia’s anti-corruption initiatives, civil society, independent media, business development, regional integration, and efforts to counter malign influence.  I would work with Armenians to help foster an impartial, independent judiciary and to safeguard respect for freedom of expression.  In doing so, I would focus on ensuring that U.S. taxpayer money is spent effectively in support of U.S. goals and objectives. The peaceful settlement of the Armenia-Azerbaijan conflict is essential to a more secure and prosperous future for Armenia and the South Caucasus.
The United States is working through bilateral and multilateral channels to help the sides achieve a peaceful, lasting, negotiated settlement of the conflict based on the principles of the UN Charter and the Helsinki Final Act.  If confirmed, I will support the Administration’s commitment to achieving this goal.  I grew up in Fresno, California, home to one of the largest Armenian diaspora communities in the United States.  My teachers and friends of Armenian heritage spoke of the Ottoman-era genocide that forced many of their families to seek new homes in America.  As President Biden said on Armenian Remembrance Day this year - “as we mourn the Meds Yeghern, let us redouble our efforts toward healing, and building the better, more peaceful world that we wish for our children.”
If confirmed, I commit to doing everything in my power to remember the victims of the Armenian genocide and support a peaceful future for Armenia.  To this end, I will do all I can to encourage ongoing normalization discussions between Armenia and Turkey, which have made some steps forward”.
Views 70