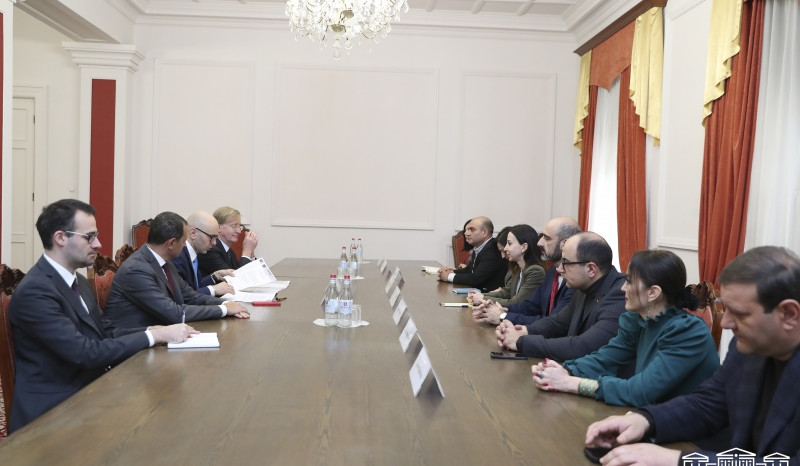 Delegation of Italy hosted in Parliament: there is great potential of Armenian-Italian cooperation

The Member of the Chamber of Deputies of the Parliament of Italy, the Head of the Section of Italy-Armenia Relations functioning within the framework of the Inter-Parliamentary Union Giulio Centemero, the Head of the Research Department of the Chamber of Deputies Giovanni Rizzonni arrived in Armenia to take part in the closing ceremony of the Twinning Project Strengthening the capacity of the National Assembly of Armenia to further support CEPA oversight and implementation.

On November 29, the representatives of the RA NA Armenia-Italy Friendship Group met with them in parliament. The Ambassador Extraordinary and Plenipotentiary of the Republic of Italy to the Republic of Armenia Alfonso Di Riso attended the meeting.

Welcoming the guests, the Head of Armenia-Italy Friendship Group Maria Karapetyan evaluated the Armenian-Italian effective cooperation and the development of the partnership relations within the framework of the Twinning Project financed by the European Union. The MP expressed conviction that after the end of the two-year Project the collaboration between the parliaments of Armenia and Italy will be continuous and especially, as a result of closely working of the Friendship Groups it will be possible to develop the relations in different spheres – education, tourism, industry and improvement of profile legislation.

During the meeting Maria Karapetyan presented the agenda of reforms in Armenia. Reference was made to the problems regarding the regional security. The Armenian parliamentarians spoke about the Azerbaijani last aggression against the sovereignty and regional integrity of Armenia and its consequences, voiced the necessity of urgent solution of the existing humanitarian problems after the 44-day war.

“I am glad for visiting Armenia again. The Armenians and the Italians have many similarities, and they should deepen the cooperation,” the Italian MP Giulio Centemero noted. The results of the parliamentary elections held in Italy in September was touched upon: Giulio Centemero noted that the Friendship Group with Armenia would be formed in the near future.