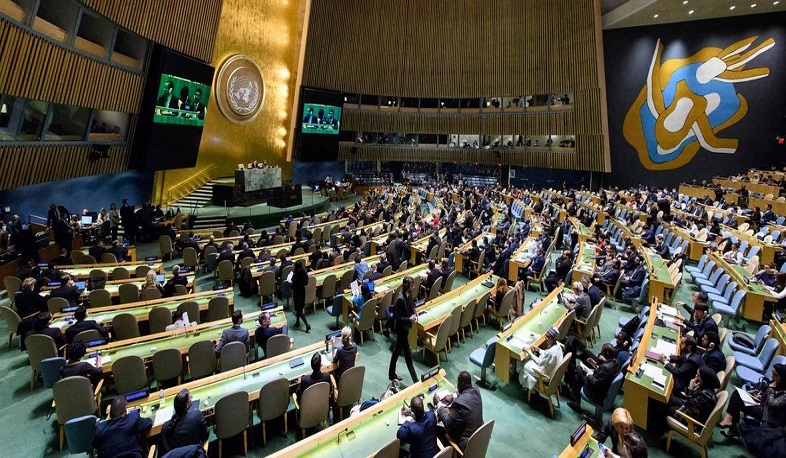 The resolution adopted by the UN General Assembly on Monday saying that Russia should make reparations to Ukraine is ineffective in terms of international law, Russian Foreign Ministry Spokeswoman Maria Zakharova said in a comment on Wednesday, TASS reports.

"Despite it being overtly anti-Russian, the resolution is null and void from the standpoint of international law because the [UN] General Assembly has neither the authority nor the competence to address such issues. Nor does it have the right to establish the fact of aggression or attribute blame to any side, for those are the prerogatives of the UN Security Council, from where Kiev’s Western supporters, incapable of compromise, have been diligently striving to remove the decision-making process on issues related to the situation in and around Ukraine," the Russian diplomat said.

Zakharova pointed to the results of the vote on the resolution which, she said, "garnered the least support of any [resolutions] adopted in the course of the emergency anti-Russian session." The majority of countries refused to back the document, while 73 abstained and 12 were not present.

"We are grateful to the 13 countries who, while being guided by the idea of justice and resolutely adhering to the right to follow a sovereign path of development, voted against the document jointly with Russia," the Russian diplomat said. "The overwhelming majority of those who supported the anti-Russian project will have no influence whatsoever on how the mechanisms they have set in motion will work. They have yet to realize that the funds the misappropriation of which they attempted to authorize would not be spent on the needs of ordinary Ukrainians, but rather sponsor additional supplies or already delivered weapons to continue the bloodshed and keep up the number of casualties in the hostilities in Ukraine," she concluded.

According to Zakharova, the UNGA meeting was an example of how the West which, she said, has been touting a rules-based world order can modify that approach, depending on the situation to the benefit of a narrow circle of nations. "The developments in and around Ukraine are a direct result of such an irresponsible policy course. Building true multipolarity based on the unconditional compliance with the UN Charter by all can be the only acceptable result," she reiterated.