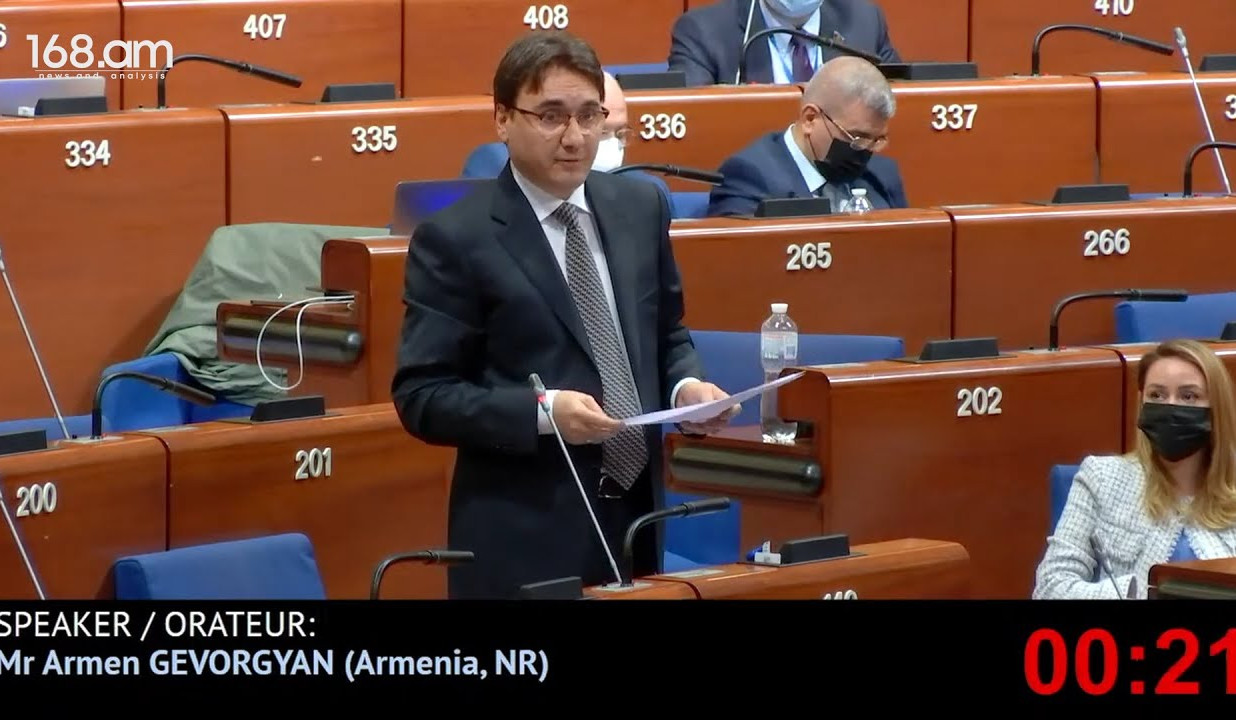 The permanent member of the RA NA delegation to PACE Armen Gevorgyan delivered a speech at PACE Plenary Session during the discussion on “Recent challenges to security in Europe: what role for the Council of Europe?”

In the past decades our organisation has tried to pursue issues like minority rights, gender equality, diversity, and other important issues for democratic statehood.

But we also failed to address more fundamental aspects of democratic peace. That is the protection of the right to life and the right of people's self-determination.

It seems to me, we have begun to treat human destiny rather selectively and very often in the context of geopolitics. Some debates in this Assembly show that we have allowed political expediency to make suffering of some Europeans more important than for other Europeans. To make the right of some European peoples’ for self-determination unconditional, while for others only decorative.

We have put much effort to abolish capital punishment in member states, but turning a blind eye on how high-tech industry creates new deadly weaponry and is freely sold in the market. I have never heard of any investigation or fact-finding missions to explore how certain member states use prohibited types of weaponry, such as, for example, white phosphorus bombs. Certain member states have demonstrated that by the using of force and money some issues can be resolved while ignoring fundamental rights and freedoms.

Mr President, it has become a strange tradition for our organisation to avoid discussing violations of certain fundamental rights and freedoms, explaining that the Council of Europe does not deal with security issues. This is a very unacceptable position which essentially encourages new violations.

Where and how it is decided that the right of people to self-determination is outside the interest of the Council of Europe? That any military aggression by any member of our organisation that kills thousands of innocent people is not our mandate?

I try and fail to understand how can the European Parliament speak the language of values and human rights by adopting the relevant language and resolutions, for example, on the Nagorno-Karabakh conflict, while the Council of Europe and its bodies, including this Assembly, hide behind political correctness and fail to call things by their name.

Mr President, I'm raising all these issues with only one aspiration: to contribute to the development of our organisation and making it a better fit to our troubled world. I believe it's through the re-establishing of an environment of respect, trust and dialogue that we can make our organisation a relevant forum for international cooperation and the protection of values of the free world.” Armen Gevorgyan concluded.