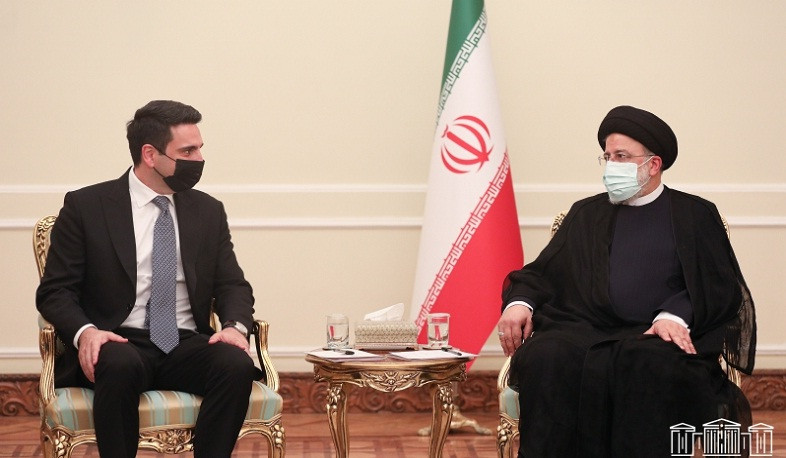 "We are friends of difficult days for our friends: Iran’s President to Armenian Speaker of Parliament

President of Iran Ebrahim Raisi received the delegation led by Speaker of Parliament of Armenia Alen Simonyan.
The meeting touched upon the Armenian-Iranian multilateral cooperation, which is based on centuries-old friendship, close historical and cultural ties between the two peoples.
Outlining the directions for boosting the bilateral partnership, the sides expressed readiness to continue the dialogue with joint efforts and further enrich the cooperation agenda.
President Raisi attached importance to the partnership between the legislative bodies aimed at strengthening the warm relations between Armenia and Iran.
The sides also touched upon the bilateral economic relations and the implementation of joint infrastructure projects.
The Armenian side highlighted the implementation of mutual agreements in the fields of energy and transport.
“I want to also state that in the context of development of regional transportation communications the establishment of Armenia’s railway communication with Iran is among the key issues on our agenda”, Alen Simonyan said.
He also introduced the Iranian President on the post-war situation, the humanitarian problems and the issue of the preservation of Armenian historical-cultural values that are under the Azerbaijani control. Alen Simonyan informed that Azerbaijan is destroying the cultural heritage at a state level, and Iran could serve as an example for Azerbaijan on this matter.
The meeting also highlighted Iran’s consistent efforts for the establishment of peace and stability in the region.
The Speaker of Parliament of Armenia expressed confidence that the Armenian-Iranian mutual partnership has a great potential to develop and expand and is ready to support the development of the Armenia-Iran mutually beneficial cooperation for the benefit of the two friendly peoples.
“We are friends of difficult days for all our friends, we are guided by this. On happy days, everyone could stand by everyone, but the real friendship is shown in times of difficulties”, the Iranian President said.
The Speaker of Parliament conveyed the Armenian Prime Minister’s warm greetings and invitation to pay an official visit to Armenia to the Iranian President.
Views 1038