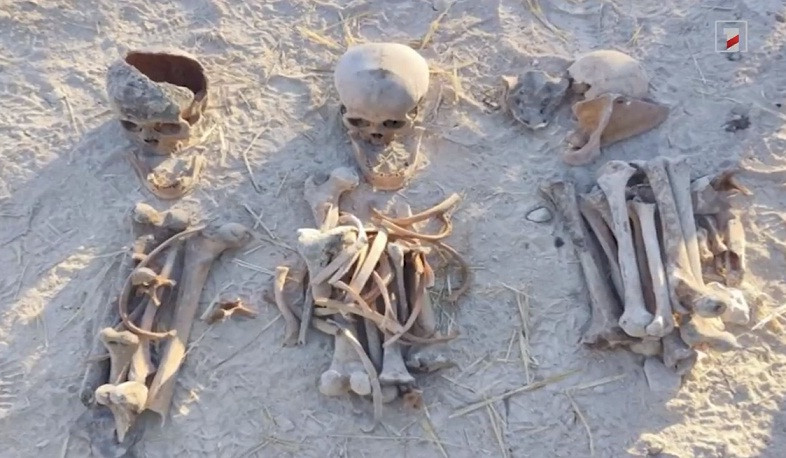 “Azerbaijan uses another opportunity to strengthen its position in Parukh.” This is the conviction of anthropologist Levon Yepiskoposyan. The Azerbaijani propaganda machine has started working again and this time announces that a grave has been found in Parukh, where Armenians buried Azerbaijani soldiers en masse during the first Artsakh (Nagorno-Karabakh) war. However, the facts prove something else.

Levon Yepiskoposyan (anthropologist) - If we take the period from 1992 to 2022 - 30 years, in 30 years such a thing does not happen. That is, the bones do not decompose this much and do not get this look. They have to stay in the ground long enough, they have to decompose, become cleaned, experts say, fossilization - that is, they become somehow stony.

The expert assures that the bones found are older, probably from the Middle Ages. Yepiskopoyan and his colleagues have conducted numerous studies in many settlements of Artsakh, particularly in Parukh, and they have never found a mass grave in Artsakh, even during the plague. The expert claims that these bones are from Parukh's grave, which was destroyed by the Azerbaijani side.

Levon Yepiskoposyan - We see that the skulls here are quite broad, they are very noticeable broad skulls. Specialists call broad skulls brachycephalic’, that is, those with broad skulls. This skull is typical to Armenians. During ethnogenesis we did not mix with other breeds, tribes, and we have a unique skull form, which the expert called Armenoid 100 years ago.

Levon Yepiskoposyan considers the claims made by the Azerbaijani propaganda machine that those buried in Parukh may have been killed in Ivanyan in 1992-1993 illogical, excluding mass burials.

Levon Yepiskoposyan - From Khojaly or Ivanyan to this area the distance is about 10-12 kilometers. Imagine, during the war, people took, that is, the Armenians took 50-60 corpses, moved 12 kilometers, brought to this area. Besides this is a Holy Land for Armenians. Why? There are many ancient tombs here. There is a famous ancient tomb here.

The Azerbaijani state propaganda machine also published the data of 62 missing Azerbaijanis next to the photo, most of whom, according to their dates of birth, are 19-22 years old, while according to the expert, it is clear from the relics that they are older people.