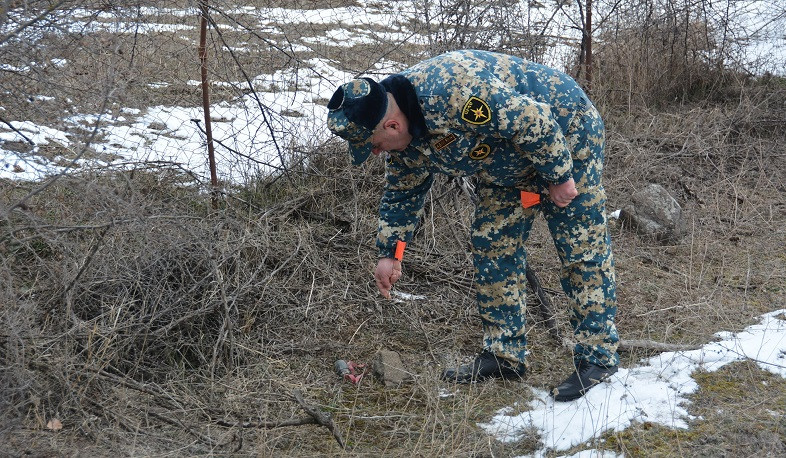 On January 17-23, 2022, 597 calls were registered at the 911 Call Center of the State Service of Emergency Situations of the Ministry of Internal Affairs of Artsakh (Nagorno-Karabakh).

Firefighters made 3 exits during the week. The registered fires were extinguished on time. No one was injured.

Rescue teams made two exits during the week to search for the bodies (relics) of servicemen killed and missing during the battles, as well as civilians. As a result of search operations carried out in the occupied southern part of Artsakh, one body was found and evacuated from the direction of Jrakan (Jabrayil).

A total of 1706 bodies have been found and confirmed since the ceasefire.

In order to find and destroy ammunition of different types and calibers, sapper groups, together with partner organizations, carried out reconnaissance and preventive work on a daily basis in all regions of the country.

In total, 5 rocket-propelled grenades, 1 grenade launcher and 1 hand grenade were found and defused this week.

During the mentioned period, 3 calls of man-made nature and 15 calls of social-domestic nature were registered. The rescuers opened 5 doors and transported 4 citizens with health problems. In order to supply water to the population, 2 exits were made. Rescuers responded to 11 other calls during the week.

Due to the heavy snowfall, the staff of the State Service of Emergency Situations carried out an intensified service throughout the country, ensuring the safe movement of children in the school areas, and, if necessary, carrying out towing work on interstate roads.

The State Service of Emergency Situations of the Ministry of Internal Affairs continues the round-the-clock enhanced service in the whole territory of Artsakh.