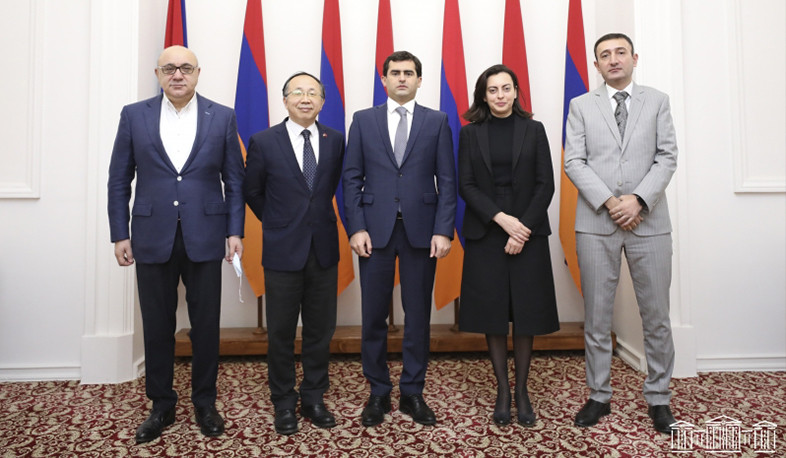 On November 26, Hakob Arshakyan, the Vice President of the Armenian National Assembly, the Head of the NA Armenia-China Friendship Group received Fan Yong, the Ambassador Extraordinary and Plenipotentiary of the People’s Republic of China to Armenia.

The members of the Friendship Group Babken Tunyan, Lena Nazaryan and Gurgen Arsenyan attended the meeting.

Welcoming the guest, Hakob Arshakyan recorded with satisfaction that there is an effective cooperation between the Embassy of China to Armenia and the RA National Assembly. In this matter the NA Vice President emphasized the Ambassador’s unique role.

“The Armenian-Chinese relations continue developing, there are opportunities of expanding the mutual trust and perception. Armenia is interested in deepening the bilateral relations in different spheres – political, economic and humanitarian,” the Deputy Speaker of Parliament said.

The Ambassador in his turn highly appreciated the level of political dialogue between Armenia and China. According to Fan Yong, we should activate the parliamentary cooperation, make the mutual visits frequent, as its number reduced due to the pandemic.

As the head of the Friendship Group Hakob Arshakyan especially highlighted the practical importance of this format in the activation of the contacts and the advancement of bilateral agenda between the legislators.

Lena Nazaryan touched upon the joint fight against coronavirus pandemic, highlighted the support of China to our country.

In the context of the expansion of bilateral cooperation Gurgen Arsenyan spoke about the necessity of the implementation of the educational, cultural programmes and added that it would give opportunity to two people to get acquainted with the cultural values.

Emphasizing the boosting of the economic cooperation, Babken Tunyan opined that despite the pandemic, the dynamics of the development of relations was mainly preserved. The MP referred to the need of the increase of the goods turnover volumes.

The sides also paid special attention to promoting the collaboration in the sphere of tourism.