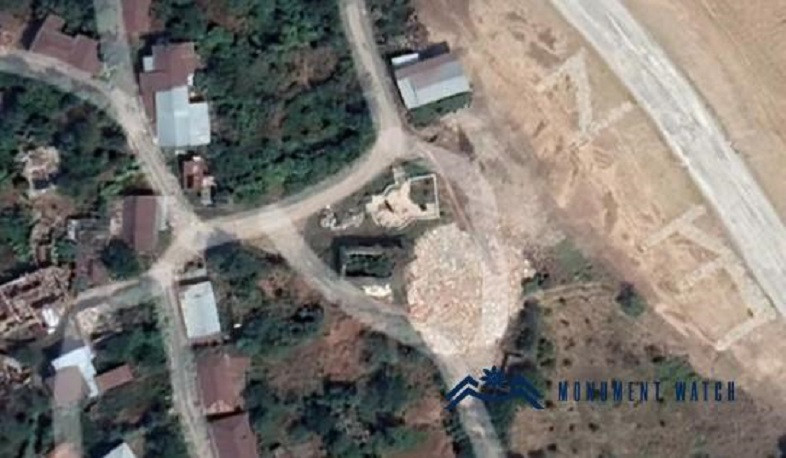 Azerbaijan destroyed the school of Madatashen village, its house of culture, the monument, and damaged the St. Astvatsatsin Church, reports Monumentwatch.org, which monitors the cultural heritage of Artsakh (Nagorno-Karabakh)

According to satellite photos of October 10, Azerbaijani have destroyed the school of Madatashen village in the Askeran region, and reached the wall of the church next to the school. The village hall and the house of culture were also located in this school.

Next to the church, there was a monument dedicated to the victims of the Artsakh liberation war in the early 1990s, and this monument was also destroyed by the Azerbaijanis immediately after their current occupation of the village.

The respective video disseminated by the Azerbaijani side clearly shows how an armed Azerbaijani soldier breaks, dismantles, and destroys the monument to the heroes of the Artsakh liberation war, breaks their pictures, and is happily photographed against the backdrop of this destroyed cultural heritage. To note, the video that was made before the Azerbaijani occupation proves that the previously mentioned school and the adjacent monument were standing at the time.

The history of Madatashen village dates back to the mid-17th century, and it was named after Russian army general Valerian Madatov, whose cattle ranches were located in this area. The St. Astvatsatsin Church of this village was built in 1904, and its wall as well as the roof were damaged, too.

The Madatashen village school, the house of culture, and the church are not part of the new road construction by Azerbaijan, and it is not ruled out that the building stones obtained as a result of the destruction of these cultural treasures are used by the Azerbaijanis as road retaining walls.