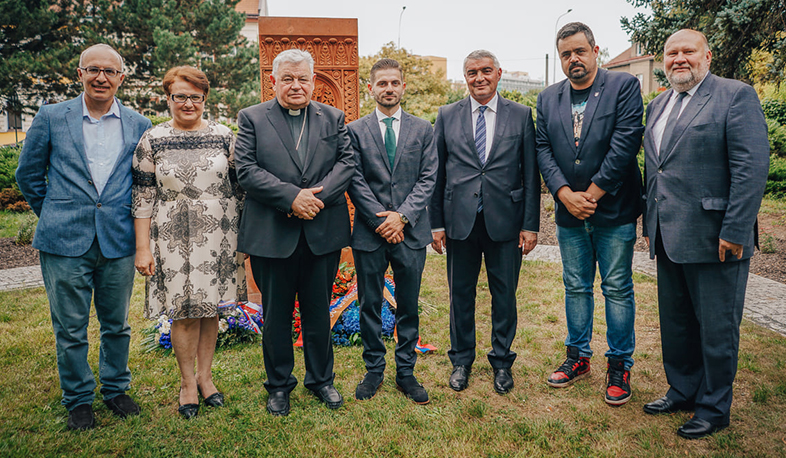 On September 15, Ambassador Ashot Hovakimian participated in the opening ceremony of a khachkar (cross stone) dedicated to the victims of the Armenian Genocide in the central park of Kralupy Nad Vltavou. The event was hosted by the Mayor of Kralupy Nad Vltavou Marek Czechmann together with his deputy Libor Lesák and a member of the City Council, our fellow compatriot Telman Nersisyan.

Welcoming the participants, Ambassador Hovakimian thanked Mr. Nersisyan for the initiative and the city authorities for their support to the latter, as well as the Czech Parliament for its recognition of the Armenian Genocide. The Ambassador addressed the importance of the Armenian Genocide recognition process in the fight against denial and in genocide prevention efforts.

Ambassador A. Hovakimian spoke about the genocidal intent of the aggression unleashed by the Azerbaijani-Turkish tandem against Artsakh last year, the existential struggle of the Armenian people and their strong will to live and create against the attempts to exterminate the Armenians, the destruction of the Armenian historical and cultural heritage and the symbolism the installation of this khachkar plays in that context.

The Ambassador also emphasized the significance of the event in the framework of the 30th anniversary of Armenia's independence celebrated this year.