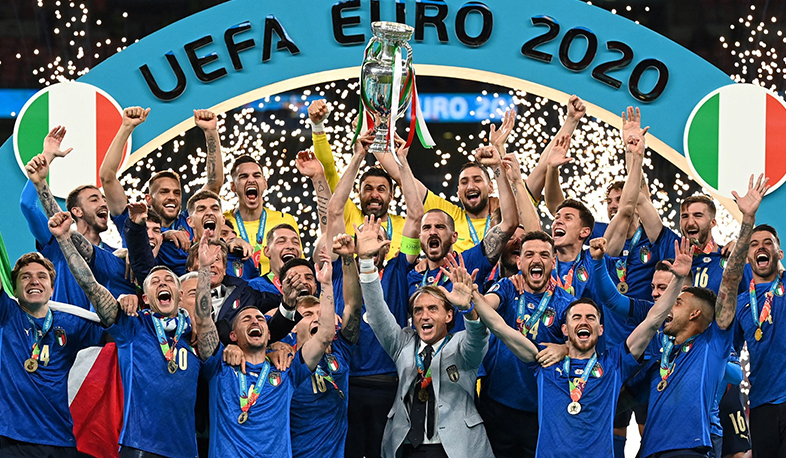 Two soccer-mad nations faced each other, and one blinked. Italy bested England in the final of the Euro 2020 soccer tournament Sunday in London, NBC News reports.
The winner was determined by a penalty-kick shootout after extra time that kept the score even at 1. Italy won the shootout 3-2 after England's final shot was blocked.
Italian player Jorge Luiz Frello Filho, known as Jorginho, missed the previous shot, blocked by English goalkeeper Jordan Pickford, sending the London crowd into frenzied cheering, but a first-time European championship for the host country wasn't to be. Italy was already up 3-2, and the score remained.
As Covid-19 infection rates continue to rise across the U.K., more than 60,000 fans, most of them English, were allowed to watch the game at Wembley stadium.
The game started quickly as England's Luke Shaw scored just 2 minutes after kickoff — the earliest goal in a European Championship final. But Italy came out of halftime aggressive and tied things up when Leonardo Bonucci bundled the ball into England's net after a goal line scramble.
Players from both teams took a knee before the starting whistle to bring attention to racial injustice, which England players did before every game of the tournament. Minutes earlier, dozens of ticketless fans broke into the stadium, with stewards and police trying to hold back the rowdy crowd as they pushed through barriers.
Prince William, his wife, Kate, and their son Prince George attended the game, the first soccer final played by the England men's team since 1966.
The tournament — originally scheduled for last summer — captivated the U.K. and Italy, which were both hit hard by Covid-19.
Views 77