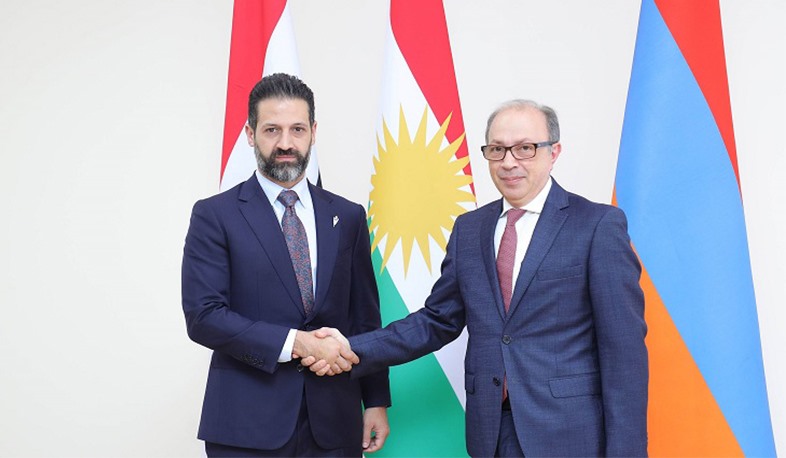 Armenia is ready to deepen cooperation with Iraqi Kurdistan: Aivazian met with Talabani

Greeting Deputy Prime Minister Talabani and the delegation led by him, Aivazian noted that this visit is symbolic from the point of view of strengthening the Armenian-Kurdish relations that are intertwined with strong historical ties.

The acting FM stressed the positive dynamics in the recent development of Armenia-Iraq relations. Also, Ara Aivazian reaffirmed Armenia’s readiness to deepen and expand cooperation with the autonomy of Iraqi Kurdistan, in this context, building on the close ties established between the Consulate General of the Republic of Armenia in Erbil and the local authorities. Reference was made to the implementation of the agreements reached on cooperation in the spheres of high technologies, creative education and tourism, which are promising directions.

Both sides lauded the contribution of the Armenian community of Iraqi Kurdistan in the political, social and cultural life of this autonomy, as well as in further strengthening the friendship between the two peoples.

Urgent regional and international issues were also discussed during the meeting. Special emphasis was placed on the protection of the rights and historical and cultural heritage of national and religious minorities in the Middle East. In this regard, the Acting Minister of Foreign Affairs of the Republic of Armenia highly assessed the cooperation on the modernization and restoration of the manuscripts of the Matenadaran Mesrop Mashtots Institute of Ancient Manuscripts in Yerevan and the Erbil Assyrian Heritage Museum.

Besides, the Acting Foreign Minister briefed the members of the delegation on the situation at the border provinces of Armenia as a result of the current provocative actions by Azerbaijan.