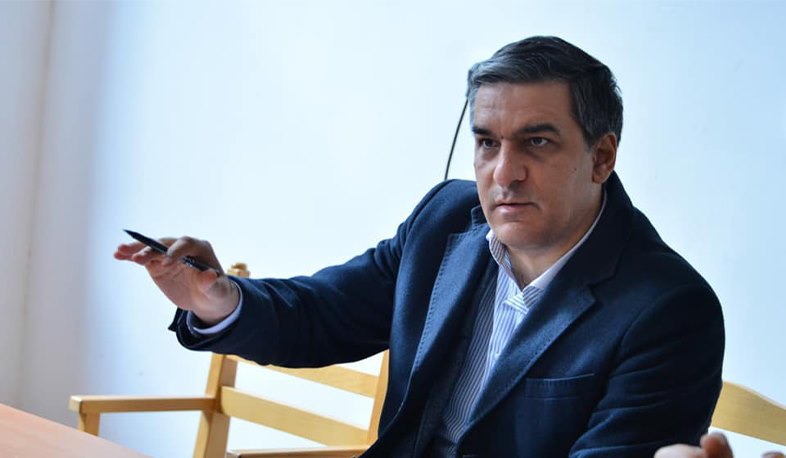 The RA Ombudsman has reacted to Azerbaijani President Ilham Aliyev’s announcement made in the village of Tsakuri in Hadrut region of Artsakh, occupied by Azerbaijan.
“We publish only facts and questions arising from them. What is this, if not hatred on the ethnic-religious basis at the highest level of government? What is this, if not evidence of ethnic cleansing and genocide policies in Artsakh? What is this, if not a fascist attitude?
Here are the words of the President of Azerbaijan in literal translation during the visit to the 12th century “Holy Mother” (Virgin Mary) Armenian Church in the village of Tsakuri, Hadrut region of Artsakh (Nagorno-Karabakh): “This is an Albanian church. The Armenians tried to Armenianize this church, they wrote inscriptions in Armenian here, but they did not succeed. This is our ancient temple, the temple of our oudi brothers, they will also come here. Just as our mosques were desecrated, so were the ancient Albanian temples desecrated by the Armenians. But we will restore, all these writings are false. These are writings added later. They have created a false story for themselves. While they did not succeed, it is a Turkish mosque. They falsified everything and turned it into a garbage dump. Look what they have done to this place, and then they say it is Armenian.”
The 12th century “Holy Mother” Church in Tsakuri is the former monastery complex of the village, Tsaghkavank, from which the small Church is preserved. According to the khachkars (cross stones), it dates back to 1198 and differs by its round door. The church is a masterpiece of medieval architecture and culture of Artsakh.
A few days ago, it was confirmed that the church of St. John the Baptist, popularly known as the Kanach Zham (Green Church), was destroyed in the Azerbaijani-occupied town of Shushi. Moreover, the church was destroyed not during the war, not during the armed attacks, but after their end.
These facts were also approved by the Armenian Ministry of Foreign Affairs in a March 18 statement, 2021.
The Armenia’s Human Rights Defender will send the records of these facts to the relevant international agencies.
But we especially note that for years in Azerbaijan the hatred and enmity towards the Armenians at the highest state level has been sown in this way, and it has not only ethnic, but also religious roots.
The facts published by this statement clearly prove that in Artsakh during the September-November war, 2020, the Azerbaijani authorities carried out ethnic cleansing and a genocide policy, and all of this continues today.
These same speeches and words of the President of Azerbaijan inspired the Azerbaijani soldiers to torture, behead, amputate bodies for fun and commit other atrocities against Armenian servicemen and civilians during the wars of 2016 April and 2020 September-November," Arman Tatoyan, Ombudsman of Armenia said in a post on Facebook.
Views 761