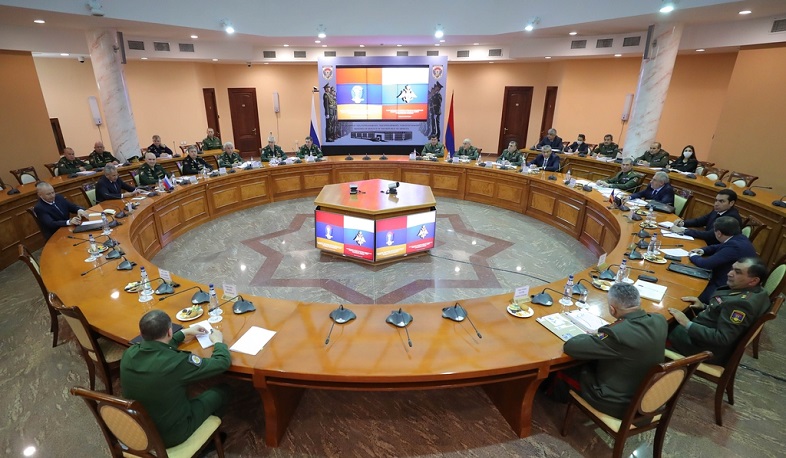 On November 21, the RA Minister of Defense Vagharshak Harutyunyan met with the Russian Defense Minister Sergey Shoigu, who arrived in Armenia on a working visit.
During the meeting, the situation around Nagorno Karabakh, the forthcoming activities and a wide range of issues related to the Armenian-Russian military cooperation were discussed.
Sergey Shoigu congratulated Vagharshak Harutyunyan on assuming the post of the RA Minister of Defense. The parties praised the role and efforts of Russia in stabilizing the military-political situation in the region, as well as the process and effectiveness of the Russian peacekeeping mission in Artsakh, according to a statement signed between Russia, Armenia and Azerbaijan on November 10. The Russian Defense Minister informed about the work already done in this direction and the upcoming programs.
The Ministers of Defense of the Republic of Armenia and the Russian Federation stredded the importance of the work of finding and exchanging dead servicemen, prisoners of war, hostages and missing persons, as well as the work of the Russian Interdepartmental Humanitarian Center established in Nagorno Karabakh to return refugees, to restore civilian infrastructure work and to coordinate the activities of different organizations in the humanitarian field.
At the end of the meeting, Armenian Defense Minister Vagharshak Harutyunyan and Russian Defense Minister Sergey Shoigu signed a package of documents regulating the frame of the operations of Russian peacekeeping troops in the Nagorno Karabakh conflict zone.
Views 239