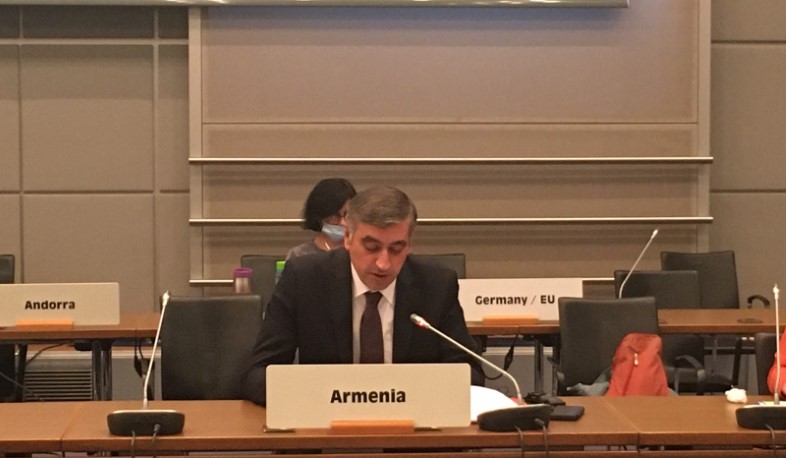 The Permanent Representative of the Republic of Armenia to OSCE, Ambassador Armen Papikyan delivered a statement on the Aggression of Azerbaijan against Artsakh and Armenia with the Direct Involvement of Turkey and Foreign Terrorist Fighters, at the 1286th PC meeting.

As of today, fierce fighting continues in violation of yet another agreement on humanitarian truce announced on October 17, causing major suffering to the people of the Republic of Artsakh. The war waged by Azerbaijan with the direct involvement of Turkey and foreign terrorist fighters poses an imminent threat to the peace and security of the wider region. The Azerbaijani armed forces, in violation of the humanitarian truce of October 10 and 17 carried out massive airborne and artillery strikes in the northern and southern directions of the Line of Contact. In the early morning of October 21, the Azerbaijani armed forces resumed shelling of civilian settlements, in particular the town of Martakert and surrounding villages, with the use of prohibited ammunition. And at about 8:30 a.m. local time, Artsakh’s air defence forces shot down Azerbaijani military aircraft in the southern direction. During the last 24 hours, the Artsakh air defence forces also shot down two Turkish ‘Bayraktar TB2’ combat UAVs.

It has become a tradition for the military-political leadership of Azerbaijan to flout their own agreements. Immediately after leaving the negotiating table and, apparently, under the pressure of the so-called “third party” - a term that in the context of Nagorno-Karabakh conflict has become a synonym for Turkey in international, including the OSCE vocabulary. By the way, it is not clear why is the international community so reluctant to name this “third party”, while Turkey itself is not even trying to hide its direct involvement?

In both cases of violations by Azerbaijan of the truce, the scenario was exactly the same. The agreement on humanitarian truce of October 10, reached with the active involvement of Moscow, was announced through a joint statement. But then, the Azerbaijani Foreign Minister after telephone conversation with his Turkish counterpart declared that conditions for humanitarian truce are lacking. This statement was echoed by announcements of Turkish officials, which proves beyond doubt that Turkey is the main obstacle for establishing the humanitarian truce.

The same scenario was repeated after the agreement on humanitarian truce was reached on October 17 with the active involvement of France. The Azerbaijani Foreign Ministry on October 17, at 23:23 p.m, just 37 minutes before the truce was supposed to enter into force, issued a press-release about another phone conversation between Foreign Ministers of Azerbaijan and Turkey. As a result, Azerbaijani military in defiance of the agreement on truce continued large-scale attacks along the whole Line of Contact.

Even the spokesperson of the Azerbaijani Foreign Ministry right after the announcement of the humanitarian truce on October 17 admitted that Baku did not intend to support the truce for a long time, and I quote “The purpose of this humanitarian truce is to exchange prisoners and bodies, but this is not the end of the war”, end of quote. This statement was made live on CNN Turk after the announcement of the ceasefire and prior to its entry into force.

The above clearly demonstrates that the decision-making in Azerbaijan is heavily influenced if not directly dictated by Turkey.

Azerbaijan also refuses to comply with one of the unwritten rules of any war and the international humanitarian law – the exchange of bodies of fallen soldiers and of prisoners of war, including through the good offices of the ICRC. In fact, Azerbaijan declined the cooperation with the ICRC, and we believe that there are several reasons behind this inhumane act. One of the reasons is the large number of bodies and remains of Azerbaijani troops left on the battlefield. According to our estimates, the death toll among Azerbaijani military is currently close to seven thousand. As of October 21, the Armenian experts identified by names and in most cases by military ranks the 937 Azerbaijani soldiers killed in action. Since Azerbaijan does not release any data on its military casualties, probably fearing the outrage of its society, the estimates of our experts could be the only credible source of information in this regard.

Of course, the most reasonable way would have been to agree and accept the services of the ICRC. But Azerbaijan excludes such possibility, which is rather symptomatic to any authoritarian and inhumane regime waging a war. Instead, the Azerbaijani side came up with another “creative idea” to return some of the bodies of the fallen Armenian soldiers unilaterally and without any involvement of the ICRC through a special corridor at the Armenia-Azerbaijani border in the north-east - far removed from the areas of military actions. And, again symptomatically, there were no words about their own fallen soldiers. Moreover, this proposal is a clear proof that it is Azerbaijan which was in breach of agreements on ceasefire, despite their otherwise claims.

Another reason for the refusal of the good offices of the ICRC is closely linked with the involvement of FTFs and jihadists in the battles. Azerbaijan understands that if the ICRC or any other international body gets engaged on the ground, the involvement of terrorists may be further revealed and registered.

Moreover, and this could be yet another reason why Azerbaijan refuses international presence in the battle areas, out of the 250 casualties  incurred during the recent battles in the southern direction, 160 were  Talysh, 70 were Lezgin, and 17 were Udin, which are the national minority groups in Azerbaijan.

Bearing in mind the abysmal situation with regards to freedom of media in Azerbaijan and even more severe restrictions imposed on already curtailed freedom of media and expression in that country, we witness the unrestrained, unchecked and massive outpouring of disinformation and fake news produced by Azerbaijani propaganda machine. We would therefore caution our colleagues against accepting for granted the narratives coming from Azerbaijani so-called media. Even worse, we have witnessed well-respected institutions falling victim to this information warfare while making one-sided and unsubstantiated statements, which undermine the credibility and evenhandedness of those who are making it.

We once again call to refrain from any statements which are based on obviously staged scenes aimed at manipulating public opinion, and unchecked and unverified allegations and claims.

Many times, including in this very hall, we have heard that Turkey is not a party to this conflict and is not engaged in the recruitment and transfer of FTFs. However, this line of argument becomes even more ridiculous against the backdrop of statements coming from Ankara. On October 20, after a Presidential Cabinet meeting, Turkish President Recep Tayyip Erdoğan said that as Turkey grows greater and stronger, its areas of interest, the issues it is directly or indirectly involved in naturally expand, that they will continue to stand with “brothers and sisters” in all regions from the Balkans to the Caucasus, from Asia to Africa. He also warned that Turkey will give many more nightmares to those who do not give up dreams to remove it [Turkey] from “this geography”, which they have defended as their homeland.

This statement beyond any doubt proves that in this current war Azerbaijan is not the main actor. It is more than obvious that this war was initiated by Turkey with the intention of satisfying the long-cherished dreams of its leadership about the revival of the Ottoman Empire. Azerbaijan in this particular context is simply a puppet which is playing the game of its master puppeteers who are pulling the strings from Ankara.

Azerbaijan heavily relies on supplies of armaments, primarily Turkish-made and operated military equipment, which are used for indiscriminately targeting and killing the civilians and damaging the civilian settlements and infrastructure. The production of these Turkish-made military equipment in its turn heavily relies on technologies, parts and elements produced and supplied to Turkey by various states, including the OSCE participating States.

We appreciate the steps taken by some to suspend the export to Turkey of important technologies and parts. And we call on other states to follow the suit in a show of social and political responsibility.

With this latest aggression, or I should say an all-out war against Artsakh and its people, Azerbaijan proved beyond any doubt that Artsakh under no circumstances and in no way can be a part of Azerbaijan. With its actions Azerbaijan lost any moral, political or legal right even to claim any type of authority over Artsakh and its people. Therefore, only international recognition of the right of the people of Artsakh for self-determination and an independent statehood will provide the necessary political and legal framework for ensuring the safety and security of the people of Artsakh. We call on all OSCE participating States to consider this issue, with an understanding of all the dire consequences of the war unleashed by Azerbaijan with the support and involvement of Turkey and foreign terrorist fighters.

As I have already stated on previous occasions, we are raising this current issue for the attention of 54 participating States.

We see no added value in engaging in lengthy discussions with either Turkey or Azerbaijan – countries that openly condone violence and terrorism. It would be a waste of time. There is no point in talking to countries that seek to resolve problems solely by force and use foreign terrorist fighters to fight their battles.

With your permission, let me say few words about statement delivered by Turkish delegation on so called Armenian terrorism.

I already touched upon this issue on previous occasions when Turkish Ambassador tried to attribute to the Republic of Armenia responsibility for events that happened well before Armenia regained its independence in 1991. I am far from assumption that Turkish delegation does not know about that fact but again desperately tries to attribute to the Republic of Armenia the actions of Armenians, survivors of Genocide perpetrated by Ottoman Turkey and glorified by today’s Turkish leadership. Those attempts are futile and aimed to somehow justify state sponsored terrorism by Turkey, a country which aligns itself with terrorists and uses them as a tool for its misguided policy of revitalising the Ottoman Empire.

On another note, probably not many colleagues here are aware that the announcement about converting the museum of Hagia Sofia into a Mosque was made on July 26 exactly at 14:53 pm. The symbolism of the time of announcement speaks for itself - Constantinople was conquered by Ottoman forces in 1453.

Today’s Turkish leadership likes symbolisms, especially those related to Ottoman empire. And it was not at all a coincidence that Azerbaijan attacked Artsakh and Armenia on 27th of September. Exactly 100 years ago, in September 1920, Turkish military invaded the First Republic of Armenia with the view to conquer and eliminate Armenia and finish the Armenian Genocide.

No doubt, the Azerbaijani aggression today is the implementation of the plan which has been devised by Turkey and which is aimed at finalising the policy that Turkey embarked upon 100 years ago. With each passing day we become more and more convinced of this. The President of Turkey was quite explicit on this, when on July 22 he said, and I quote, "We will continue to fulfil the mission our grandfathers have carried out for centuries in the Caucasus".

These words leave no doubt as to the intentions of Turkey with regards Armenia, Armenian people and the region in general. And the intentions of Turkish leaders leave no doubt as to the fate of the Armenian people, if the Republic of Armenia fail to withstand this massive aggression and offensive by the combined Azerbaijani-Turkish-terrorist-jihadist forces.