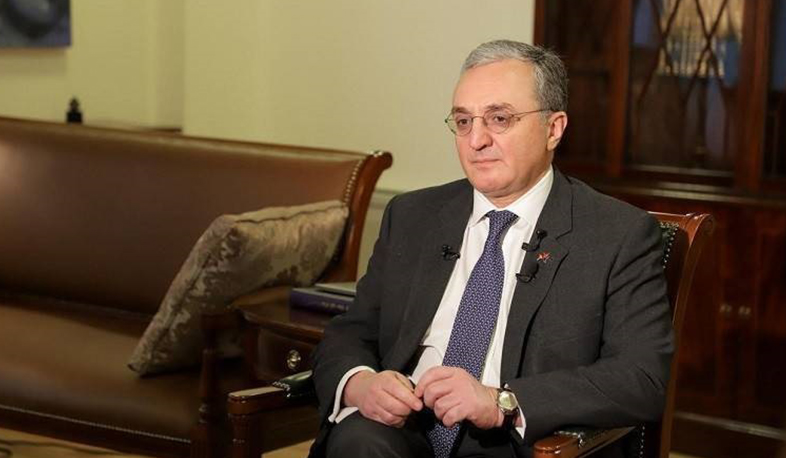 The game of accusations that Azerbaijan is trying to impose on us is not justified. Mnatsakanyan

France 24: Mr. Mnatsakanyan thanks for speaking to France24 today. Azerbaijan is saying that they responded to Armenian shelling this Sunday. I’d like to start with your response to that, please.

Zohrab Mnatsakanyan: The Nagorno-Karabakh defense forces or the Republic of Armenia and its Armed forces had absolutely no intention to escalate the situation any further. There was an aggression by Azerbaijan in 2016, an aggression in July 2020, and now a renewed massive escalation across the entire perimeter of the Nagorno-Karabakh line of contact with Azerbaijan. And this was a pre-planned, carefully planned massive attack across the entire line of contact. The blame game that Azerbaijan is trying to impose is not justified. We repeat, once again, there have been many proposals to establish very precise risk-reduction mechanisms, investigative mechanisms, ceasefire-regime-strengthening mechanisms, which have been strictly denied, because the use of force has been exactly the instrument of Azerbaijan.

Zohrab Mnatsakanyan: Yes, as I was saying there is a massive attack on the Armenian positions of Nagorno-Karabakh across the entire perimeter from South to North. There are attacks on the civilian towns of Martakert and the capital of Nagorno-Karabakh-Stepanakert. Heavy artillery, aviation, tanks are used, UAVs, drones are used. And the most disturbing thing is that there is a new component to this, the destabilising force of Turkey, which is very visible in this conflict, which is present with its military presence, with its aviation. And this is a very disturbing thing.

France 24: We were just getting news here that Azerbaijan has ultimately introduced a martial law. This is something that Armenia has already done, of course. What does that look like on the ground where you are?

France 24: Are you concerned that this can escalate even further?

Zohrab Mnatsakanyan: We are very concerned with this aggressive, massive attack. Azerbaijan shows no intention to act towards de-escalation. And, of course, we are prepared for any scenario, which is very dangerous for the region, but as I was saying, we are prepared to defend most decisively.

France 24: We’ve seen ultimately in the last few months, you know, this long running conflict that has to be said, rearing its head, once again, for decades now of this unresolved conflict over Nagorno-Karabakh. Can you see it being resolved?

Zohrab Mnatsakanyan: Absolutely, we have been and remain totally committed to strictly peaceful resolution of the Nagorno-Karabakh conflict. There is an internationally agreed, internationally mandated format for this: the OSCE Minsk Group Co-Chairmanship which comprises France, the United States, and the Russian Federation. We are totally committed to this process, to resolve the conflict strictly through peaceful means, and a solution, resolution which is based strictly on a compromise, a solution which is acceptable, in the words of the Prime Minister of Armenia, to the people of Armenia, people of Nagorno-Karabakh, people of Azerbaijan. What we have unfortunately been dealing with is the absolutely maximalist position of Azerbaijan which denies any recognition of the interest and concerns of the people of Nagorno-Karabakh and its authorities and the people of Armenia. The maximalist position has been rejected and remains rejected. We are prepared for compromise. However, this massive escalation is bringing in a new situation we have to deal with.