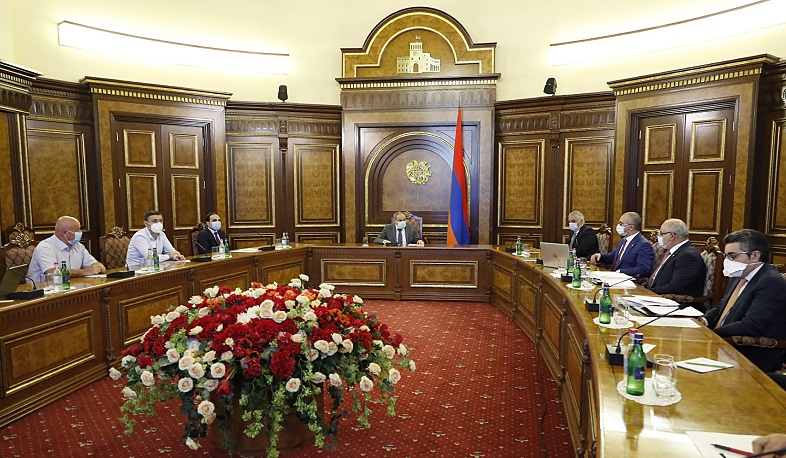 During the consultative meeting, which was chaired by Prime Minister Nikol Pashinyan, Chairman of State Revenue Committee Eduard Hovhannisyan reported back his agency’s annual performance for 2019 as part of the Government’s Program of Activities for 2019-2023.

To begin with, the SRC Chairman dwelt on the work done to assess and curb the tax shadow, improve IT infrastructures, strengthen partnerships between the tax authority and taxpayers, as well as organize administrative work aimed at facilitating the business environment, improving the management of tax and customs authorities and promoting international cooperation.

Early in 2018, the State owed a debt of 275.7 billion drams to taxpayers, of which AMD 132,7 billion - in terms of transitional overpayment, and AMD 143 billion - in terms of debit overpayment. Following extensive efforts, the government’s indebtedness to economic entities was reduced by 200 billion drams to AMD 76.6 billion as of January 1, 2020.

To improve the applicable tax and customs clearance procedures, customs control risk profiles have been developed and introduced at state border checkpoints, as a result of which queues and time spent on crossing the border were reduced at border checkpoints.

A “smart system” of risk management has been developed and introduced, which allows for a more flexible and efficient customs control over commodities transported across the border of Armenia. In particular, the instances of physical checkups of goods imported across the border of Armenia by customs authorities significantly decreased in 2019 as compared to 2018. Their share in the total number of customs declarations fell to nearly 12% in 2019 against 22% in 2018.

In 2019, the number of complex tax audits by the tax authority decreased by 5.6% as compared to the same period in 2018. As the number of complex audits decreased, the amount of additional liabilities rose by 81.2%, while the amount of excess liabilities per audit also increased by 92.0%. Motor-borne crossing of Armenia’s borders with EAEU- registered vehicles was significantly simplified in the period under review.

The first stage of construction works at the Foreign Economic Activity Center in Gyumri will be completed within the coming month, while the second stage is due in 2021 and will be complete by the end of the same year.

During the meeting, Prime Minister Pashinyan was presented the strategic program of SRC development for 2020-2024.
Summing up the consultation, the Premier stressed the importance of consistent efforts towards reducing the black economy, modernizing tax and customs administration, combating corruption, improving the quality of services provided at border checkpoints. The Head of Government noted that he is going to visit the border checkpoints in the near future to assess the work carried out since his previous visit.

Nikol Pashinyan noted that despite the crisis year, the Government has set the bar sufficiently high for budget receipts, and the State Revenue Committee must do everything to live up to the task set before it. Highlighting the Government’s decision to build a foreign economic activity center in Gyumri, the Prime Minister told those responsible to exercise strict control over the ongoing construction activities.