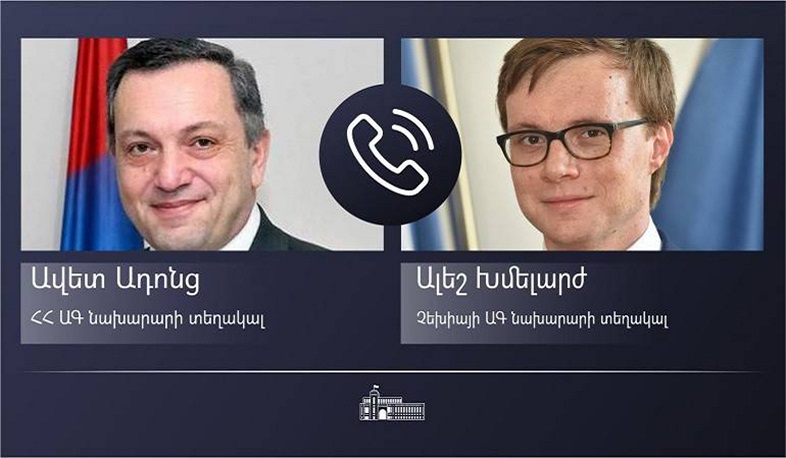 Avet Adonts briefed his Czech counterpart on the situation created by the use of force by Azerbaijan along the northeastern part of the Armenian-Azerbaijani state border since July 12, as well as Azerbaijan's ongoing aggression against civilians and civilian infrastructure. Presenting the Armenian position on the issues, the Deputy Foreign Minister invited Aleš Chmelař's attention to the officially stated intention of Azerbaijan to strike the Metsamor nuclear power plant, which constitutes the threat to the peaceful population of the whole region. Avet Adonts also condemned Turkey's anti-Armenian policy and the latter’s unilateral support to Azerbaijan, which further destabilizes the region.

Within this context, Deputy Minister Aleš Chmelař noted that such threats are totally unacceptable. He then underlined the importance of refraining from escalation of tensions, returning to a constructive negotiating field and resolving the conflict by exclusively peaceful means within the framework of the OSCE Minsk Group Co-Chairmanship. In this regard, he attached importance to the recent phone conversation between the Armenian Foreign Minister and the EU High Representative and the subsequent statement.

Touching upon the Armenia-EU relations, the interlocutors discussed the process of ratification of the CEPA, as well as other important issues relevant to the Armenia-EU agenda.

The sides also exchanged views on the current level of the Armenian-Czech bilateral relations and their prospects.

The Deputy ministers presented the situation with the COVID-19 epidemic both in Armenia and the Czech Republic, as well as the measures taken by the respective governments to overcome the epidemic and to improve the socio-economic situation in the countries.