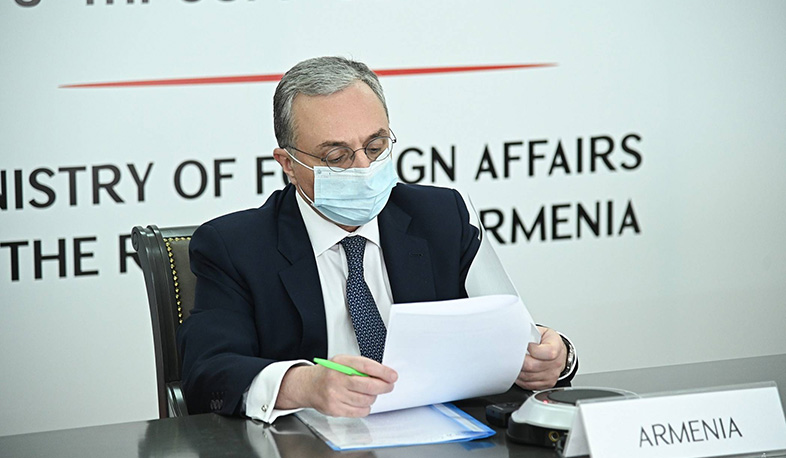 On July 1, the Eastern Partnership Foreign Ministers held a video-conference with the participation of Oliver Varhelyi, the Commissioner for Neighbourhood and Enlargement and the Foreign Ministers of the Eastern Partnership member-states. During the video-conference, the participants exchanged views on 5 long-term objectives of the EaP post-2020 agenda, and touched upon the discussions held during the Leaders’ video-conference, as well as the works to be completed ahead of the physical summit, scheduled for March next year.

Touching upon the 5 long-terms objectives of the EaP post-2020 agenda, Minister Mnatsakanyan underscored that in case of Armenia, all 5 long-term objectives, particularly the resilient, sustainable and integrated economies, accountable institutions, the rule of law, security, the resilient, fair and inclusive societies as well as the digital transformation and environmental climate resilience very much coincide the priorities of the Government of Armenia and its mandate, and the Comprehensive and Enhanced Partnership Agreement also includes the same objectives.

“We have the CEPA, which is the foundation of our cooperation with the European Union, and it is very inclusive. The CEPA also has parts related to sectoral cooperation, freedom and justice, which includes those five objectives. I think the EaP has been and remains a very important consolidating platform to amplify our national effort, and our national programs and priorities. So the discussions should specifically focus on revealing those details which consolidate our national efforts towards our national priorities, and outline the benefits of cooperation. The EU has been and remains a very important partner for Armenia in all those spheres, which are outlined in the CEPA and in our reform program and development program”, the Minister stressed.

Touching upon the principle of differentiation in the context of the Eastern Partnership, Minister Mnatsakanyan emphasized that the differentiation should be combined with inclusiveness, which is very important.